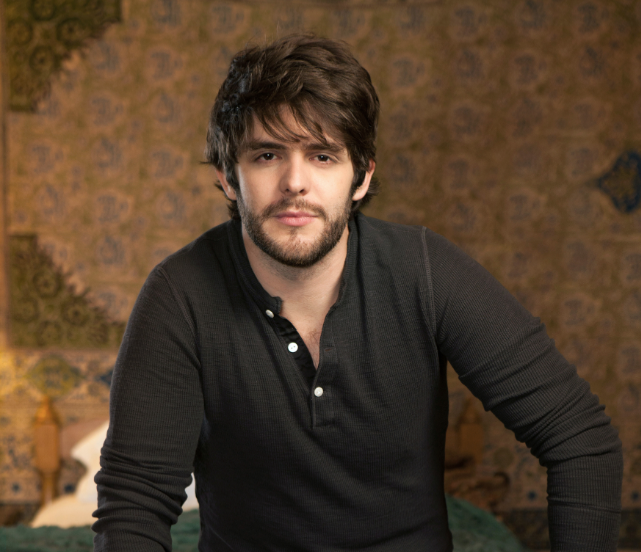 2014 is quickly becoming an impressive year for Valory Records recording artist Thomas Rhett. The talented singer/songwriter is celebrating his second back-t0-back #1 single with “Get Me Some Of That,” as well as two CMT Music Award Nominations.

In addition to his solid music career, Rhett is also involved with an important cause – Outnumber Hunger.  Since 2011, Outnumber Hunger has helped Feeding America secure more than 25 million meals for local food banks.

In support of the Outnumber Hunger program, Thomas Rhett is part the new song “Give ‘Em Hope” which serves as the official anthem for the program.  “Give ‘Em Hope” is available on iTunes now HERE, and features 11 top artists and bands including, Danielle Bradbery, Vince Gill, Lauren Jenkins, Toby Keith, Martina McBride, Cassadee Pope, Reba, The Band Perry, The Cadillac Three, Thomas Rhett and Chris Young. Forty-eight percent of the anthem purchase price is being donated by Big Machine Label Group to Feeding America to benefit local food banks across the country.

CountryMusicRocks recently caught up with Thomas Rhett to chat with him about his involvement with Outnumber Hunger, his recent #1 single “Get Me Some Of That,” heading back out on the road with Miranda Lambert this summer, and much more!

CountryMusicRocks: Tell us a little about Outnumber Hunger and your personal involvement with the program.

Thomas Rhett: This is my 3rd year being involved with Outnumber Hunger.  I joined up with the team with Outnumber Hunger right as it was getting going. Since from the beginning to now, the amount of meals that Outnumber Hunger, teaming up with Feeding America and General Mills, have donated to food banks is outrageous. The donations have been crazy, the fans participation has been crazy. The best thing about it is, it’s so easy for people to get involved in. Every family that goes to the grocery store can get involved in some way or another. Whenever you buy a General Mills product at the grocery store, whether it is Cheerios or a Green Giant product, there is a code on the back of all those boxes that you can enter at OutnumberHunger.com. Once you enter that code, you enter your zip code and five meals are donated to your local food bank in the area that you are at. A lot of people when they donate are wondering where the money is actually going when you buy something at the grocery store like that, those meals are actually donated to the food bank that is within your zip code which is really cool.

Another way to help is a bunch of us artists teamed up and sang a song called “Give ‘Em Hope,” which has become the official anthem for Outnumber Hunger. When you download that song, 48% of every download goes towards Outnumber Hunger donating to local food banks. There are a couple of easy ways you can get involved. When you hear the stats that 1 in 6 Americans go hungry every single year, every single day, it makes it that much easier for you to want to get involved and want to help out with this awesome cause.

CountryMusicRocks: What was it like to be chosen to be a part of “Give ‘Em Hope” as it is a huge compilation for such an important cause?

Thomas Rhett: It was awesome! The fact that Reba, Vince Gill and Toby Keith were on there, along with people that are on my record label – The Cadillac Three, Danielle Bradbery, The Band Perry. It was such a cool thing to see all of your buddies in country music team up and get together on that song.  I went in, there wasn’t any other artists there, but I went in there and sang my part. I got to hear Reba on the track, and me & Reba on the track just sounds like I’ve never even learned how to sing in the first place because she is so amazing. It was just a really cool thing to see everybody kind of doing their part and giving back to the community in a way of singing country music. It doesn’t get any cooler than that to me.

CountryMusicRocks: 2014 is has been an amazing year so far for you & you just scored your 2nd #1 single this week. What has it been like for you watching “Give Me Some Of That” grow & top the charts as well become certified gold?

Thomas Rhett: The coolest thing was coming off a #1 and seeing this one go up the charts so fast and becoming another #1. It’s a really cool thing to have one, but to have two in a row is something that I can’t really put into words. Having two #1’s back to back has really just changed my life. It’s changed the way that we’re perceived. It has gotten us on a lot of really cool tours and it has gotten us a lot of really cool publicity. I’m just extremely blessed and pumped to be in the position that we are at. I’m so thankful for the songwriters that wrote a bunch of those songs. For me, I’m on cloud 9 just touring the country and getting to play songs that are considered #1 songs to a bunch of fans. It’s one of the funnest things in the world.

CountryMusicRocks: Your music is out there, fans are absolutely loving it, what is it like for you hearing fans sing your music back to you?

Thomas Rhett: It’s why I do it. It’s why I wanted to be a country music singer in the first place. I remember going to shows when I was little, and me being that kid singing all the hits that I would go to concerts and see these guys play. Now that I’m actually the one that is up on the stage and people are singing my songs back to me, it’s one of those things that it’s kind of what you live for. That’s why you put so much effort in touring the country and writing songs, just for that maybe hours worth the time where people can have a good time and sing along to your songs. It just makes everything worth it.

CountryMusicRocks: Having two back to back #1 singles, does that add any extra pressure to you now that it is time to select your third single?

Thomas Rhett: Oh totally! They say that your more important one is the one that comes after your first number one. So hopefully we got the most important one out of the way with two back to back. But to have continued success is not an easy thing.  Once people here your best stuff, they want to continue to hear your best stuff. Obviously we are going to try to put out our best songs, but you know in this day & age you just never know what a hit song could be. You never know what fans are liking anymore. But lucky for me, I get to go out and play for the fans every night so I’m getting a really good vibe of what they’re liking and what kind of country music songs they want to hear. Hopefully we can continue to put out hit songs, and hope that fans love them and want to get them on iTunes and make them bigger fans than they were previously. Yeah, there is pressure, but at the same time it’s fun pressure. There’s that fact of “man I think this is a hit song” and if it is, then maybe I should just trust my gut from now on. It is one of those things that is definitely nerve wracking, but it is a lot of fun to be involved in.

CountryMusicRocks: In addition to being an artist, you are also a very accomplished songwriter.  Is it getting more difficult for you selecting which songs your going to keep for yourself versus releasing them for someone else to record?

Thomas Rhett: Oh definitely. Songs I write everyday, I’ll send them in to my publishing company. I’ll get phone calls once a week saying, hey man do you want to hold this song for your record because so-and-so really wants to cut it today and put it on their record, and put it out as their first single. Those are very hard conversations to have because when your making a record, you have to sift through so many different songs. And it’s not just about one song, it is about how those 12 or 13 songs are compilated on your record. Artists are always second guessing their record once they finish it, or at least I am. I could still go back and change a lot of things about the first record. But there comes a point where you just have to be content and satisfied with your work, and know what songs you took and what songs you gave away were for the right reasons. I’ve got a lot of good people on my team that really trust me, and I trust them, so I know what songs we do pick to put on the record are definitely the ones that need to be on there.

CountryMusicRocks: It was just announced that you will be joining Miranda Lambert on her Platinum Tour this summer! What are you looking forward to most going back out on the road with her?

Thomas Rhett: You just answered my question, just being back out with Miranda makes everything worth it. And that fact that Justin Moore is out there.  Me and Justin have become really good friends over the past couple of years. Me and him just sang on Brantley Gilbert’s new single “Small Town Throwdown.”  It’ll just be a lot of fun to get back out there and reunite with those guys.  Even if it is only for a couple of months, it’ll be one of the funnest couple of months that I’ll have this year. We’re just really looking forward to getting back and hanging with those guys. My band has become really close with all of Justin’s band and Miranda’s band & crew. Just a lot of good people and a lot of good vibes on that tour. We’re just pumped to be out there.

CountryMusicRocks: Country Music is consistently evolving and growing. What is it that you love most about this genre?

Thomas Rhett: The fact that it is consistently changing and evolving.   The fact that for the next ten years, that there won’t always be just the same songs being sung. The thing about country music is there is an endless amount of stories that people have, that songwriters have had in their past that can be put into three minutes of a song. The same with artists and if artists cut those songs, there is a lot of people’s stories being told on the radio. That’s the coolest part about it, you can have a song like “Cruise” that makes you feel good, or you can have a song like “The House That Built Me” that may relate to somebody randomly in Wichita, KS. That’s the coolest thing that country music songs written in Nashville are translating to people not only in America, but to people in different countries as well. I think it’s just the stories, they will always remain the same. The music and the melodies will always be evolving, but I think the stories will always be why country music is what it is.

Join Thomas Rhett and help support Outnumber Hunger by picking up a copy of the official anthem “Give ‘Em Hope,” featuring Rhett and many more, on iTunes HERE.

Learn more about the Outnumber Hunger program and how you can support YOUR Local Food Banks by visiting OutnumberHunger.com.