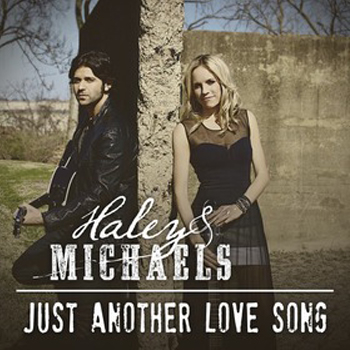 Fresh to the country music scene, new country duo Haley & Michaels, made up of Shannon Haley and Ryan Michaels, debuted their single, “Just Another Love Song,” exclusively on SiriusXM’s “The Highway.” The single, featuring Richie McDonald of Lonestar, has been added to iTunes’ “New and Noteworthy” section and can be downloaded HERE.

Co-penned by Shannon Haley, Ryan Michaels and Richie McDonald, “Just Another Love Song” captures those emotions left behind from a relationship that has reached its bitter end, but like every memorable song, there’s a twist.

“We got in the room to write for the very first time with Richie McDonald and we started talking about love songs and what happens to those songs after you break up. Of course Richie was part of one of country music’s greatest chart-topping singles of all time, ‘Amazed,’ so he had a good grasp on the concept,” Ryan Michaels explains for the inspiration of the song. “We wondered, what do you do when you break up with someone and that song becomes ‘just another love song’?”

Duo partner Haley interjects, “So we took that question and decided to write about it. We all thought it would be cool to integrate a famous love song and all of us, including Richie, were searching the Internet for the right love song to fit. When it finally hit us that we were in the room with the person who sang one of our favorite love songs of all time, we laughed and realized it had already been decided. I don’t want to give it all away, so I hope everyone will go and listen to find out how we took a famous love song and added it into to our break up song.”

Working with producers Matt McClure and Kyle Jacobs, who recently produced the CMA and ACM Song of The Year, Haley & Michaels debut single “Just Another Love Song” can be found on the duo’s forthcoming debut album to be released later this year. To listen to the exclusive audio stream visit Roughstock.com or click HERE.

Download “Just Another Love Song” on iTunes by visiting, http://bit.ly/1hkFAa6.