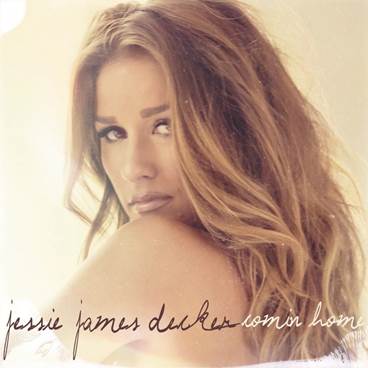 CountryMusicRocks got the opportunity to catch up with Jessie James Decker to talk about her new music, plans for this summer and more!

CountryMusicRocks (CMR): You just released your brand new EP, Comin’ Home, and it went straight to #1 on iTunes chart! Tell us a little about this collection of music?

Jessie James Decker: I’m so excited. I could not believe it when I got the message from my team that it was #1. I was like ‘what, is this for real?’ I just couldn’t believe it. I’ve been so out of the music scene publicly, I’m always writing and always working, but I’ve been kind of out of it the last few years. I didn’t really know if people would still want to buy the music or if I’ve been out of it for too long. It feels so good to know that people are still paying attention to the music and still want to hear from me. It feels really good to know that my music fans are still out there.

CountryMusicRocks (CMR): Country elements can be heard in your new music. Is it safe to say that your still staying in the country genre ?

Jessie James Decker: Absolutely! My heart is in country music and my heart is in Nashville. I just have a lot of pop influences and I always have and I always will.  Shania Twain was completely an infusion of pop and country, and I think the way our country music is turning today is definitely a fusion of both genres. I am a southern girl from Georgia so obviously my influences are always going to be very southern and very country. I just felt like with this album I didn’t want to have to put it in a box. I just wanted to put my favorite songs on there and I felt like it all kind of worked together. Even though some are more country than others, I still felt like it flowed nicely and I didn’t want to put myself in a specific box.

CMR: You  named the EP after one of the songs Comin’ Home. Tell us a little about that song and what made you select it as the album title?

Jessie James Decker: I wanted it to be the album title, not just specifically because of the song. The song is about coming home to your loved ones from being away from them for so long that you just can’t take it anymore, and you got to get back to see them. That was something that at the time, I was away from Eric and I just couldn’t wait to get back to be with him, my husband my family. Part of me wanting to the name the album Comin Home was I just felt like it was coming back to basics, back to my roots. I’m a mom now and I’m a wife, those are such big roles in my life and I felt like it was getting back to what’s real. I felt like this album was definitely a reflection of that, so I wanted to call it Comin Home.

CMR: You feature “Mama’s Lullaby” on Eric and Jessie this Sunday night (4/20) and it is clearly a beautiful and personal song. Give us a little background on the song.

Jessie James Decker: I wanted to write Vivianne a lullaby just for her, that was specific to her, that she could listen to as she got older and really cherish. I got to write it with one of my very best friends, Alyssa Bonagura, who writes a couple of songs on the album. It was really special to write it with her because she is one of my very best friends. I call her my musical soul mate because she is.  It was very special to write that with someone who is going to love Vivianne, as a best friend and even kind of as an aunt, Aunt Alyssa. That was very special. But getting to record it, we recorded it together and she produced it. It was special because I was sitting there crying in the vocal booth. It was so special, it was very emotional.

CMR: If there were one thing that you would like to convey about you as an artist & your music, what would it be?

Jessie James Decker: I think that I’m kind of like you, I’m just like you – you meaning fans. I kind of a girl next door and so down to earth. I love my family and if people watch the show they can see how much I’m passionate about my family and my husband and what I prioritize. I think that is what I want them to know is I’m like them. I just a happy girl, living life and trying to juggle everything.

CountryMusicRocks (CMR): Speaking of juggling everything, how do you balance your music career, being wife and being a new mom?

I kind of feel like I balance it all like everyone else does. Even though I’m doing different things, I’m an artist and my husband is a football player, but I feel like I balance it just like any woman and mom would do. You’ve just gotta make it work. I want to make sure my family is fed and dinner is on the table, but I want to be able to finish recording my album and make sure my husband is supported as an athlete. There are so many elements, but I feel like I’m such a happy person that I don’t let it stress me out or let it worry me. At the end of the day it is all about just loving each other and everything comes together. At the end of the night, sitting down together and having dinner and not letting too many things stress you out.

CountryMusicRocks (CMR): You’ve shared several big moments with millions of viewers on the Eric and Jessie Game On show, what has that been like, and do you foresee yourselves still doing that now that Vivianne is here?

I definitely will say there were a lot of moments that were shared on the show and it was kind of cool to be able to watch back our wedding, the most wonderful day of me & Eric’s life as a couple, and now still in the process of our baby girl coming in to the world. It was really special too because we can look back on this, and Vivianne can look back on this, and be like ‘hey, that’s when mommy wrote you that song’ that’s really special.  As far as season 3 goes and filming things, we are not there yet. I’m not there yet in my mind if that is going to happen or not. There is a lot of things that have changed now, and I’m a mother now to a little girl so I’ve got a lot to think about. Definitely just focusing on season 2 right now.

CountryMusicRocks (CMR): With summer quickly approaching, what are some of your plans music wise?

I wanted to give myself after Vivianne was born a few months to just be with her and do things from home. I’m here in Nashville so I’m able to go and write everyday with my publishing company and be creative in that way, and be able to come home and spend time with her. I’ve given my management team the green light that this summer I am ready to be booked for shows and start getting out there again. She’ll be four or five months at that point so she can come out with me and I can still take care of her.

CountryMusicRocks (CMR): Country Music is consistently evolving and growing. What is it that you love most about this genre?

I just love country music because it is so real. It talks about real life and real things. I love pop music too, it is very relatable in that way, but there is something about country music that is just so sweet and down home. It is the way that I grew up, I can relate to every song that is on the radio. It is real life and that is what I love about it. My husband loves it too, he’s sitting here shaking his head, ‘I love country music’!! That’s the way we grew up and our towns. There is something special about being able to write how you really feel and having other people relate to it, and that’s what country music is.

One reply on “CountryMusicRocks Interview With Jessie James Decker”