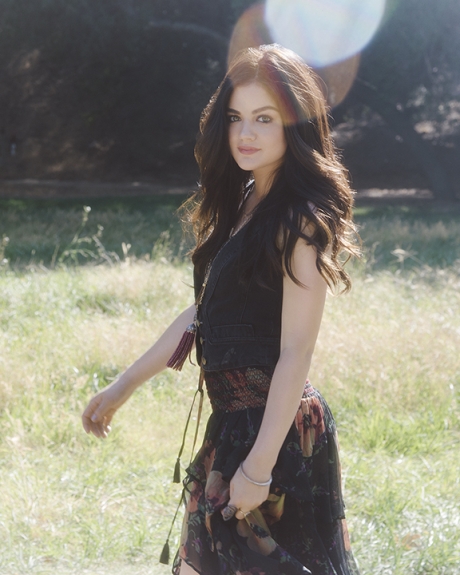 The new year is off to a stellar start for singer and actress Lucy Hale! After being named one of 2014’s Ones To Watch by the likes of Billboard, Country Weekly, Rolling Stone, Shazam USA Today and more, and seeing her first single, “You Sound Good To Me” climb the country radio charts, Lucy recently revealed plans to release her highly anticipated country debut album in late spring.

Her more than 9 million online fans and followers were the first to hear the big news that her debut record, Road Between, will release June 3rd on DMG Nashville/Bigger Picture Group.

“This has been a dream of mine since I was a little girl singing Faith Hill and Shania Twain songs into my hairbrush in the mirror,” reveals Lucy. “It was both exciting and scary for me to be so vulnerable making this album, and it’s turned out to be something genuinely me and something I’m really proud to share.”

Adding to the excitement, Lucy has been invited to make her debut on the Grand Ole Opry this Friday, February 21st from Nashville. For more information on how to catch her first steps onto the legendary Opry stage, please visit HERE.

In addition, Lucy’s performance at the legendary Grand Ole Opry will be live streamed on a new app called Hang w/ so her fans can tune in to this milestone in her career. Download Hang w/ for iTunes or Android.

Fans and critics alike are eager for Lucy’s music debut. USA Today called her hit single “effervescent” while CMT.com proclaimed, “the actor-turned-singer sounds very legit, very country, and much like a sure thing for country radio.” Written by Nashville tunesmiths Ashley Gorley, Luke Laird and Hillary Lindsey, Hale’s first single, “You Sound Good To Me,” premiered exclusively on SIRIUS XM’s The Highway in early January.

The Memphis born-and-raised 24-year old has been out on the road meeting country radio, fans, and tirelessly honing her performance skills during hiatus from her hit show, “Pretty Little Liars.” Lucy is eager to share her longtime love for music with her country debut album, Road Between, due June 3rd on DMG Nashville/Bigger Picture Group.