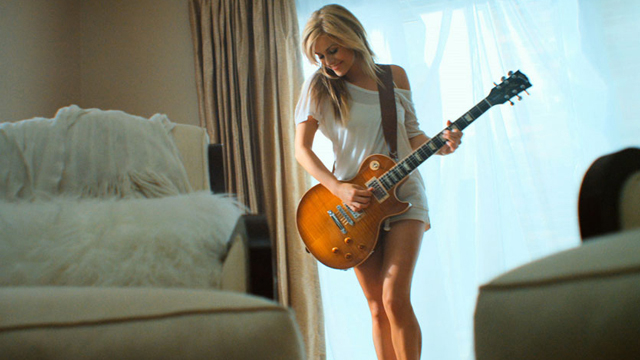 Directed by Roman White, the video was shot in the Belle Meade mansion Connie Britton rented during the first season shoot of ABC’s “Nashville.” The feel-good video takes place on a lazy, sunny Saturday morning with a couple playfully realizing how much they are truly in love. The video showcases Ell’s guitar prowess, as well as the rising star’s easy-going, girl-next-door personality.

Ell has racked up an impressive list of accolades in only a few short weeks on the scene.  The 24-year-old Calgary native has been hailed as “a true triple threat” by Guitar World and “a star in the making” by Taste of Country.  Her debut single, “Trippin’ On Us,” was selected as an iTunes “What We’re Listening To” release and Ell has been declared “One to Watch” by the CMA and Entertainment Tonight (Canada).

This past week Ell and her multi-instrumentalist talents were profiled on Billboard.com while the beguiling new star discussed haunted tour stops, Keith Urban, her iPod playlist and more on leading lifestyle site SheKnows.

Country chanteuse and guitar-slinger Lindsay Ell has also been been lauded as “One to Watch in 2014” by the editors of Country Weekly. Calling Ell an “anomaly” in country music due to her “furiously good” guitar playing.  The magazine – on stands now – also declares her “equal parts coo and growl” country vocals as “tailor-made for radio.”

Ell debuted as the #1 Most Added Artist at Country Radio when her first single, “Trippin’ On Us” earned 50 adds across both Country Aircheck/Mediabase and Billboard/BDS.   The single continues to rise up the country charts.  “Trippin’ On Us” is available now at iTunes HERE.