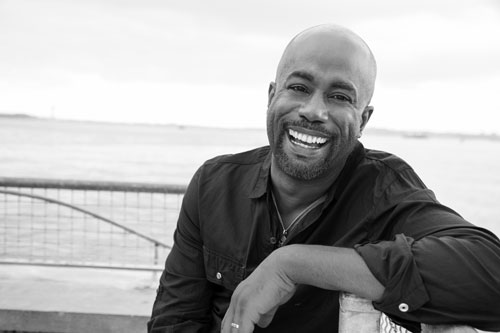 Capitol Records Nashville’s Darius Rucker released his new single, “Miss You,” to Country radio. “Miss You” was written by Darius and his producer Frank Rogers and is the fourth single from Rucker’s third solo country album, True Believers, which featured hits including “True Believers,” “Radio” and the Grammy winning and ACM nominated “Wagon Wheel”.

“’Miss You’ is a song about life,” explains Rucker. “This one was fun to sing because it is rare that I really let go like that with my vocals – and I love the twist the lyrics take at the end.”

Rucker recently performed “Miss You” on NBC’s The Tonight Show with Jay Leno which can be viewed here (at the 40 minute mark).

Coming off of his third career Grammy win and his first as a country artist for Best Country Solo Performance on the No. 1 smash hit “Wagon Wheel,” Rucker is now nominated for three Academy of Country Music Awards including Single Record of the Year, Song of the Year and Vocal Event of the Year for “Wagon Wheel” featuring Lady Antebellum. The 49th Annual Academy of Country Music Awards will be broadcast LIVE from the MGM Grand Garden Arena in Las Vegas on Sunday, April 6 at 8:00PM ET/PT on CBS.