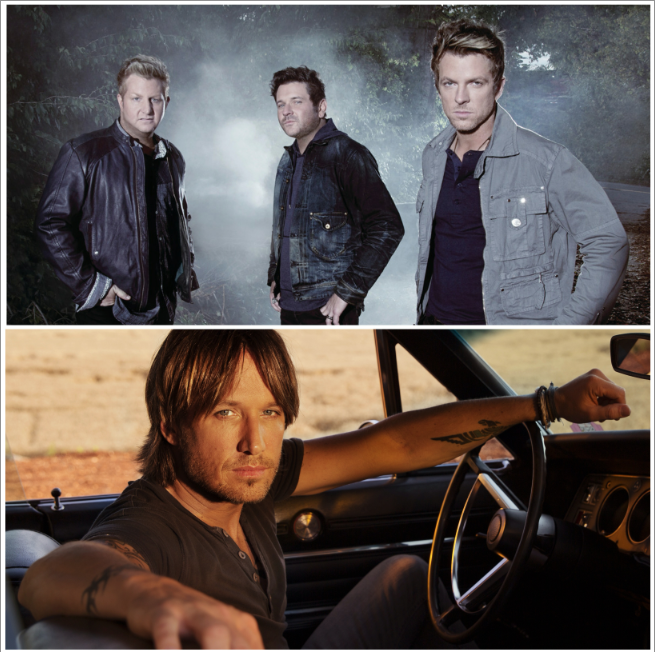 The Academy of Country Music announces the 2nd Annual ACM Party for a Cause® Festival will be headlined by Rascal Flatts and Keith Urban on Friday, April 4 and Saturday, April 5, respectively, at The LINQ , Caesars Entertainments new open-air retail, dining and entertainment district at the heart of the famous Las Vegas Strip.

The full line-up will include Joe Nichols, Jerrod Niemann, Thomas Rhett, Chris Young, The Cadillac Three, the three ACM New Artist of the Year nominees and more to be announced.  Fans can purchase a two-day pass for both nights beginning at 10 AM PT on Friday, January 24 at www.ticketmaster.com.

The two-day outdoor music festival will be the first-ever special event held at The LINQ. The LINQ will transform into a country music fans paradise during the ACM Party for a Cause® Festival. The stage for the Festival will be placed right next to the Las Vegas High Roller, the focal point of The LINQ and the worlds tallest observation wheel.

“We are thrilled to kick off the first of many large-scale concerts and events at The LINQ with the Academy of Country Music, said Jon Gray, vice president and general manager of The LINQ. Caesars Entertainment has always been an industry leader in presenting top-of-the-line entertainment experiences in Las Vegas, and our space at The LINQ offers many new opportunities for us to continue to raise the bar of the citys entertainment landscape.”

The Festival will include elements previously tied to the Academys lifestyle event, such as multiple stages for ongoing LIVE country music performances, interactive games, a country marketplace, and more to be announced.  The event is part of The Week Vegas Goes Country® leading up to the 49th Academy of Country Music Awards on Sunday, April 6, 2014 at 8:00 PM live ET/delayed PT on the CBS Television Network.

The Academy is honored to have Rascal Flatts and Keith Urban headline two separate nights of incredible music during The Week Vegas Goes Country® said Bob Romeo, CEO of the Academy of Country Music. Fans nationwide plan their vacations around ACM events, and they will be blown away by The LINQ and all that Caesars has put into the property.  Were privileged to be the first event in this very special space.

On Friday, Outnumber Hunger Live! will be headlined by Rascal Flatts,and will include Thomas Rhett, The Cadillac Three as well as more to be announced.  Now in its third year, Outnumber Hunger is an initiative from General Mills, Big Machine Label Group and Feeding America that helps fight hunger in local communities. To date, Outnumber Hunger has helped secure more than 25 million meals for Feeding Americas network of local food banks.

Saturday evening will be headlined by Keith Urban, and will include Joe Nichols, Jerrod Niemann, Chris Young and the three nominees for ACM New Artist of the Year, to be announced.  The night will be presented by ACM Lifting Lives® and will benefit several military philanthropies, to be announced.

TICKET INFORMATION: ACM A-List Members can purchase tickets in a special pre-sale beginning at 10 AM (PT) Wednesday, January 22, 2014 by visiting www.ticketmaster.com. The pre-sale code will be emailed to all A-List Members prior to the on-sale date.  General public ticket on-sale will begin at 10 AM (PT) Friday, January 24, 2014 at www.ticketmaster.com.