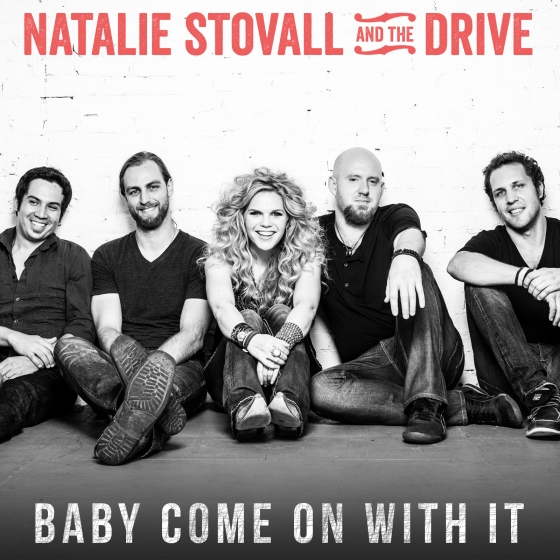 Dynamic new talent Natalie Stovall And The Drive are starting the new year with a bang by releasing their debut single, “Baby Come On With It,” to country radio. The lead single from the recently released self-titled HitShop Records EP, available now at iTunes, is an up-tempo toe-tapper and urges everyone to let the stresses of life go and have a good time.

“Baby Come On With It,” written by Chris Destefano, Jerry Flowers, and Bobby Hamrick and produced by GRAMMY winner Paul Worley (The Band Perry, Dixie Chicks, Lady Antebellum), has an infectious hook that is sure to get you singing along by the first chorus and throbbing banjo and electric guitar as Natalie shows her musical prowess on the fiddle. The song, which officially impacts country radio on February 3rd, is already spinning on SiriusXM’s The Highway. Natalie and the band can’t wait to hear their first single while on the road as they kick off another busy year of touring next week. The supercharged song can be downloaded at iTunes HERE.

Stovall, a Tennessee native, is a relentless road warrior, amassing over 200 dates each year across college campuses, clubs, and military bases around the globe. Natalie has been playing professionally since she was 10 and performed everywhere from the White House to the Oprah Winfrey Show. A fiddle phenom, she made her Grand Ole Opry debut at the age of 12. Natalie Stovall and The Drive is led by multi-instrumentalist and powerhouse vocalist Natalie Stovall. The Drive includes drummer James Bavendam from Seattle, Chile’s Miguel Cancino on guitar, Zach Morse from Cheyenne, Wyoming on bass and vocals and Redding, California guitarist and vocalist Joel Dormer.