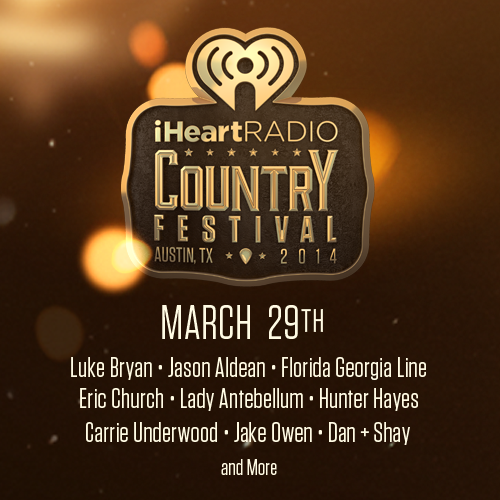 Straight from the heart of Austin, the music of the iHeartRadio app will come to life with an extraordinary lineup including Luke Bryan, Jason Aldean, Florida Georgia Line, Eric Church, Lady Antebellum, Hunter Hayes, Carrie Underwood, Jake Owen and Dan + Shay, with more to be announced. The iHeartRadio Country Festival will be hosted by nationally-syndicated Country music personality Bobby Bones.

“The response to our country performers at the last three iHeartRadio Music Festivals was so incredible we decided to create an entire show just for them,” said John Sykes, President of Clear Channel Entertainment Enterprises. “It will be a country fan’s dream and a testament to the power of country music and recognition of the stature of these artists.”

Clear Channel will launch a six weeklong nationwide promotion in advance of the event, beginning Monday, January 13, giving thousands of Country music fans nationwide the opportunity to win a trip to Austin, Texas for a one-of-a-kind experience at the iHeartRadio Country Festival. The promotion will run across more than 120 Clear Channel Country radio stations as well as on iHeartRadio.

“Country music is experiencing an unprecedented explosion of popularity with music fans across America, and there’s no better way to celebrate that than by building on the incredible success of our annual 2-day iHeartRadio Music Festival and creating the biggest dedicated multiplatform event ever featuring the biggest stars in Country music,” said Tom Poleman, President of National Programming Platforms for Clear Channel Media and Entertainment. “The core of our business is the bond our local stations have with our listeners and an important part of that is to give them extraordinary events no one else can provide. With the largest reach of any country music radio group, we’re thrilled to add this once-in-a-lifetime ‘all things Country’ mega festival to iHeartRadio’s exceptional lineup of can’t miss events.”

Fans who cannot attend the iHeartRadio Country Festival will be able to listen live on Clear Channel’s Country music radio stations in the local markets or on iHeartRadio.com. Streaming details will be announced soon.

Tickets go on sale to the general public on January 18, at 12 p.m. EST. For more information visit iHeartRadio.com/countryfestival.