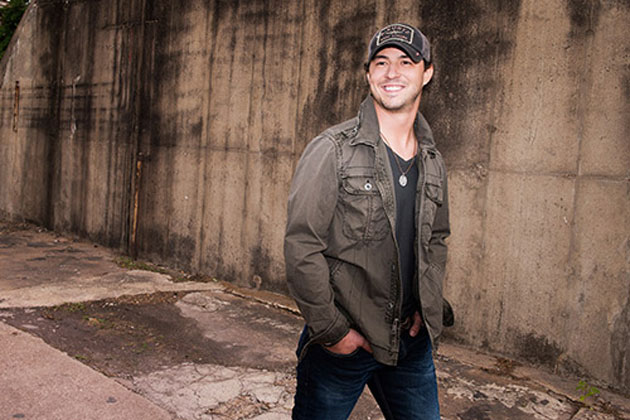 Country Music Newcomer Weston Burt recently released his sophomore single “Smile That Smile” to country radio. Signed with HitShop Records, Burt has made a strong impression on the genre with the release of his Lucky Sometimes EP earlier this year, along with his debut single “Lucky Sometimes.”

CountryMusicRocks caught up with Weston to chat with him about his exciting year, new music, & more! Check out our interview with Weston Burt and be sure to grab his Lucky Sometimes EP featuring latest single “Smile That Smile” by clicking HERE.

CountryMusicRocks (CMR) – What has it been like for your this year being out on the road promoting your debut EP and new single “Smile That Smile”?

Weston Burt (WB) – It’s a blessing. I feel so privileged to do this for a living. This is my job. People wake up in the morning and they think, man I’ve got to put on a suit or I’ve got to put on khakis, but not me. I get to go to work and I get to play music and I get to meet wonderful people everyday, and it is amazing. It’s not easy. The toughest part is being away from home, being away from your family, your wife and kids.  But the thing is, when you meet fans that is what it is all about. The fans just keep you going. It has been a lot of fun.

CMR – You recently released your new single, “Smile That Smile.” Give us a little background on the song.

WB – The song was written by Dallas Davidson, Ben Hayslip and Rhett Akins.  It was just one of those songs where when I heard it, I knew exactly what was going on. It just made the world of sense to me. It’s always funny, I make a joke in my show and tell the girls the reason your here tonight is the reason everybody is here. But it’s true. When girls smile, everything magically goes their way. I just think it’s an honest song and I’m excited to be fortunate to sing it.

CMR – This summer you released your debut EP. How would you best describe the album?

WB – I wanted to introduce myself well with the EP. I wanted to show the fans what I’m about, and that’s life, love and rock-n-roll. There’s a little bit of all of that on this EP. When the full album comes out, that’s when your going to see.  When you come to a Weston Burt show, it is going to be wide open from the get-go. I’m going to slow it down a couple of times and sing a song for the girls, and “Something To Love For” I always dedicate to the military and to the mamas, but other than that, it is going to be wide open. It’s about having fun and enjoying music.

CMR – Where are you at with the release of your full length studio album?

WB – That’s the million dollar question.  I’ve got a lot of songs in my “arsenal” and we are getting ready.  It’s one of those things where, and I know a lot of other artists think this way so I’m not reinventing the wheel and I’m not the only one, but when I put out music, I want to make sure fans are getting 100% the best music that I can provide. It is something I don’t take lightly and it is something I want to take my time with. So we’ve got a lot of songs that we are going through, and we want to make sure that it is the right time. But it is coming soon. I’m anxious to get it out and play new music.

CMR – With the holidays right around the corner, what are your plans during your time off?

WB – Touring really stops around Christmas time, so I would say that the thing I’m really looking forward to most is sleeping. But my daughter wakes up about 7-7:30 every day!! But it is actually really awesome. The biggest thing for me is just family time. Spending time at home and with my folks and in-laws as well.

CMR – What has been one of your standout moments for 2013?

WB – I’ve been very fortunate to be in this business, but to also play with a lot of talented artists. I think the highlight of my career this year has been releasing the single, and also one of the funnest ones was opening for Sheryl Crow.  I’ve been such a huge fan of Sheryl my whole life. When I met Sheryl, she was one of the nicest people I’ve met in my life. I was just thinking, look at this woman. It doesn’t get any better than Sheryl Crow! I wanted to tell her so bad just take all her old music and re-release it! Change the name of something and put a “the” in there. Not only her, but opening for Gary Allan, my gosh.  To be included with these people & these artists and the massive careers that they’ve had, just to be in the mix has been a blessing.

WB – I think the biggest thing in this business is about is making friends and making fans. As long as when I go to a show and fans are having fun, that is all it is about for me. If I can make more friends and fans in 2014, then I feel like I’ve been a success.

CMR – As a new artist, what one thing would you like to convey to fans about yourself and your music?

WB – Hang on, because it is going to be fun!

CMR – Music is consistently evolving. In your opinion, what do you think sets country music apart?

WB – The thing about country music, and with all music, music evolves. Period. It’s the world we live in. Think about how far we’ve come in just worldly things in 10 years, and 20 years, 30 years, and music is no different. So the thing that I think is impressive about country music, is that it has the ability to just roll with the punches. I think that is fantastic. It is almost like a small company. Small companies have the ability to turn & manuever, and  that’s country music. I think that everyone has such an open mind and it makes it easy to do. I think that country music is going to continue to evolve just like everything else, and continue to get better.  I’m excited to see what the future holds for country music.