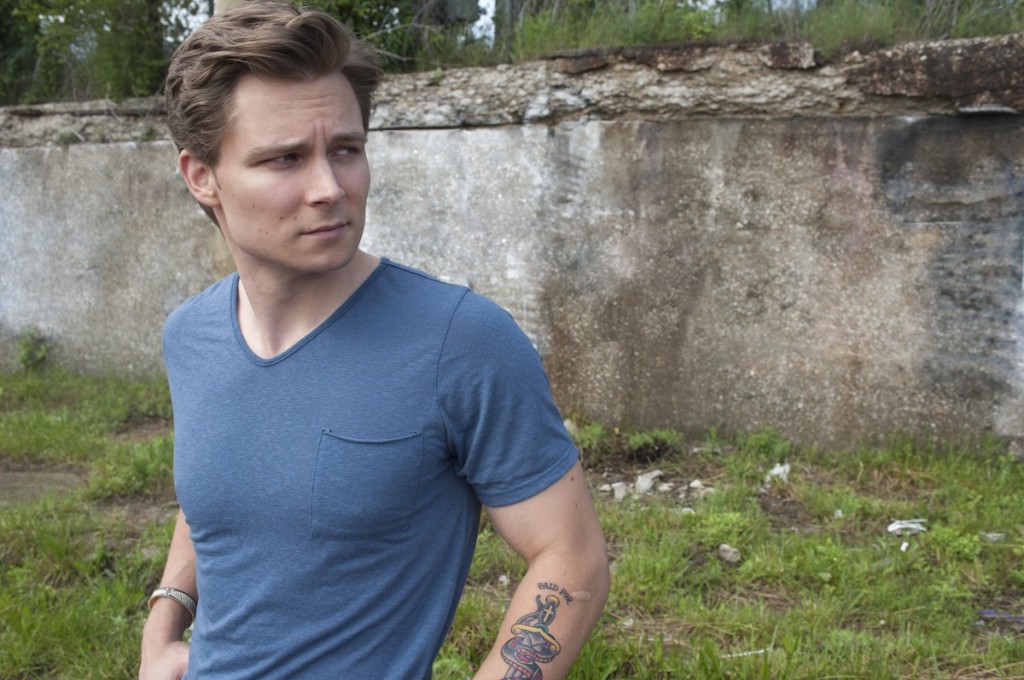 Warner Music recording artist Frankie Ballard has been making a big impact on country radio with his hit single “Helluva Life.”  The new song is the first release from his forthcoming sophomore album, and serves as a solid introduction for what is ahead for Ballard and his new music.

CountryMusicRocks caught up with Frankie to chat with him about new music, his forthcoming album and much more!

CountryMusicRocks (CMR) – What has it been like being back on the road promoting your new single “Helluva Life”?

Frankie Ballard (FB) – Exciting! People are really digging it at country radio and been giving it a lot of spins.  It is finally getting to the point now where people are really hearing it in like daytime parts.  I’m seeing a lot of action on Twitter and Facebook of people hearing the song. Initially you go out & introduce the new tunes to the radio folks and after they get it going a little bit, they want you to come in and do a show for their listeners. We’ve been doing a ton of that and traveling around. It’s exciting because you know when they are calling you up, that means they are digging the music and their listeners are digging it too.

CMR – What has it been like for you watching your song “Helluva Life” grow over the past few months?

FB – It sounds so cliché, but I’ve never had a song this high on the charts. 27 I think was the highest my last one got.  It is all uncharted waters and it is scary and nervous, but it is doing so well and it is just fun to watch. It is not stressful like it was in the past where we were like ‘we got one spot this week, or we stayed even’, this one is just flying so it has been exciting.

CMR – How does your new single personally relate to you?

FB – I was so excited that we put this song out first from this project because it is very parallel with the journey I’ve been on. I’ve had a first [album] and a couple of singles that did sort of mediocre. I thought my first single was going to come out and we would go right up the charts, but it didn’t always work out like that. It is the ebb and flow of the music business. In thinking about that, and thinking about my career and some of the harder times, I thought this is not unique to the music business.  Everybody deals with the woes of life, getting thrown a curve ball, or things not working out as you may have planned.  So I knew that feeling and hearing this song, its a hopeful song and a song that evokes emotion like appreciation for the things you have.  I knew that a lot of people that heard that on the radio would also think ‘you know what, this is not so bad you know. We are blessed to be in this rat race called life and be thankful for what we’ve all got right now. ‘

CMR – How would you best describe your sophomore album?

FB – It has been exciting making this new album because I’ve gotten to do it a completely different way. The first time around I was in a production relationship that really didn’t work out that well.  I’m a guitar player and I wanted to play guitar on the records.  My first guy had his kind of A Team guitar players that he wanted to use, and I really didn’t get that much say on the arrangements and all that stuff.  All of my favorite records were the guys that spent a lot of time making them. Things kind of build organically and grow, not just get in an slam through some tracks.  I found a guy, Marshall Altman who was an LA guy fresh to Nashville, who was willing to invest a lot of time into that process. He’s got a little funky studio over in Berry Hill in Nashville.  I would go over there late at night and we would mess around. Not even having any songs to work on, just experiment with guitar tones and different guitar things. As we were building these tracks from scratch,  we were hearing ‘maybe there is like a banjo on this thing,’ and I would just go play it because it was all right there. It was so much fun artistically for me, and the freedom I had.  We really let it grow from scratch, we had the freedom to experiment.  The songs and everything are a true expression of me artistically.

CMR – How far are you into the new album?

FB – We are done! It has been like 18 months in the making.  It is totally “in the can” as they say.  This is the fun part now, playing it and promoting it.

CMR – What was one of your favorite moments recording your sophomore album?

FB – Honestly, some of these things are hard to know what you have until they get mixed. That’s not something we do.  We get it all recorded and we can kind of do some rough mixes & things until it goes off to our guy, Justin Niebank. He is so good. He has to isolate every little instrument and get the best out of it. It is a grueling process. His portion of the process is a really important one. When you get it back from Justin and it is mixed, that is when things really start to pop and stick out. When we got back “Helluva Life” from getting mixed, I remember cruising back to the house and I was listening to the mix and I thought to myself ‘wow! we really  have something with this song.’ The meaning of the song, the lyric and the story it evokes was always there, but the production was something.  You have to marry the production to the lyrics, and there has to be just as much emotion in the production. So when we got it back and really married the two, I was so excited and I knew I wanted it to be the first single. I couldn’t wait to turn it in.

CMR – How do you feel you’ve grown as an artist since your debut release to now?

FB – Well, the bad times make the good times better, just like the song. I feel a lot more mature as an artist.  I had a very  ‘I want it now’ sort of attitude the first time around. I didn’t understand the whole radio “game” sort of speak and how it takes time. The folks at radio have to learn to trust you as an artist, like is this a guy that is going to be around for a while and is this someone we can count on for hit music for a long time and build a relationship with him. Naturally they are a little apprehensive at first, and it was hard for me to understand that. But now I’ve built relationships with a lot of these people in country radio.  I’m a lot more patient now. I don’t watch the charts and stress out. I think one of the biggest things, and a real point of stress for me before, was seeing my contemporaries move past me. In the whole 18 months off from the radio and making this record, I’ve really learned that this is my journey.  I can’t look at other people and compare myself.  It’s my journey and my time, and it has been a lot more comfortable this time around. I’m secure in the fact that this is my music, and it will happen in its own time.

FB – It is all about this new project and new music, and taking it to the people. We’ve worked so hard, and country radio has taken a chance on putting this song out there and turning it into this hit song. So now in 2014, I’ve got to get out there and seal the deal sort of speak, and be touring & playing live.  Really going out there and winning that fan base. I’m going to be hitting the road really hard.

CMR – Music is consistently evolving, what do you think sets country music apart?

FB – I think its ability to be very pop in some cases but still country, and very rock in some cases but still country, and then everything in between. As far as country radio is concerned, you can go from Brantley Gilbert and Eric Church who have that rock edge to them, all the way to Lady Antebellum where some of that stuff is very pop sounding and Taylor Swift who can cross over. With those folks, I think it is really cool that they can reach out and pull some fans from pop music and rock music into what we are doing here.  To me, it is so cool that we can all exist under this umbrella of country music.  It really is, at the end of the day, country.  It is cool that we don’t all have to be the exact same kind of country music, and it allows more fans to come in and join us.

“Helluva Life” is available on iTunes now by clicking HERE.  Be sure to grab a copy and continue to request at your local country radio station.

One reply on “CountryMusicRocks Interview with Frankie Ballard”