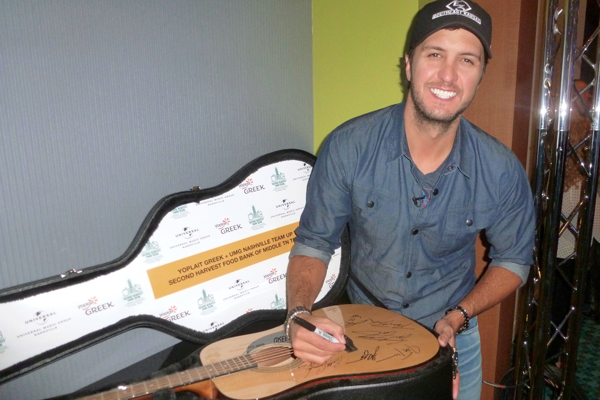 This week, Nashville’s finest – including Luke Bryan, Vince Gill, Billy Currington, George Strait, Kacey Musgraves, Easton Corbin, Dierks Bentley and many others took a break from the Country Music Awards prep and celebrating to do their part to help Yoplait Greek and Universal Music Group fight hunger. Each took part in the effort by signing a guitar that will be auctioned off to benefit the Second Harvest Food Bank of Middle Tennessee.

Second Harvest Food Bank of Middle Tennessee is one of the largest food banks in the U.S., with a mission to feed hungry people and work to solve hunger issues in our community. According to the USDA, an estimated 50.1 million Americans are at risk of hunger, and 16.7 million U.S. children under 18 are food insecure. In the state of Tennessee, one in four children are food insecure, and in Middle Tennessee alone, 31 percent of the people Second Harvest serves are children.