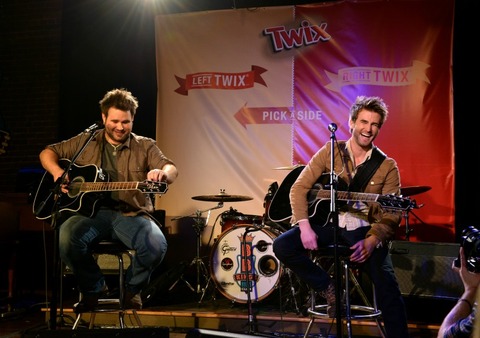 The Swon Brothers – Zach and Colton – two of country music’s brightest rising stars who recently signed with Arista Nashville, have been performing together for years.  But this week, they accepted a challenge that put them on opposite sides of the stage – and the TWIX® Brand rivalry.

Zach released a special jingle for Left TWIX, while sibling Colton shared a theme song for Right TWIX. Now, it’s up to fans everywhere to help “pick a side” between these clashing confections and their equally sweet songs.

Zach and Colton debuted the tunes Tuesday to a room full of adoring fans at B.B. King’s in Nashville, Tenn., and now the brothers are competing for bragging rights as they find out which will entice more people to choose their TWIX-themed songs. Fans can watch the Swon Brothers engage in some spirited banter about Left TWIX and Right TWIX, which culminates in a sing-off on YouTube. At the end of the video, viewers will be asked to pick a side, which may be trickier than it sounds since both songs are almost as identical as the chocolate-covered cookie bars they salute.

Zach Swon saw this jingle writing competition as the perfect opportunity to decide which Swon brother is truly superior. He said, “Left TWIX is always on the cutting edge of marketing so it wasn’t surprising that they selected me to write something special for them.” Meanwhile, Colton Swon countered, “Right TWIX is known as the more innovative cookie bar so it made sense that they would look to the real creative genius in the Swon family to write their song.”

“The Swon Brothers fully embraced the rivalry between Left TWIX and Right TWIX as they took to the stage singing in support of their side,” said Roy Benin, Chief Consumer Officer, Mars Chocolate North America. “Their competition was so believable that – just as the ‘uniquely’ different cookie bars only share a wrapper – the crowd thought that the only thing bringing the country duo together was a last name.”

Since July 2012, the world has been watching as the friendly rivalry between Left and Right TWIX has unfolded through a series of TV and online ads. It’s a simple story of two factories with two different philosophies, making two identical cookie bars. Right TWIX is cascaded with caramel and cloaked in chocolate, while Left TWIX is flowed with caramel and bathed in chocolate. Consumers are asked to “Try them both and Pick a Side.”

To learn more about the rivalry between Left TWIX and Right TWIX, visit the TWIX YouTube Channel at www.youtube.com/user/TwixVideos or check out the Facebook page at www.Facebook.com/twix.us.