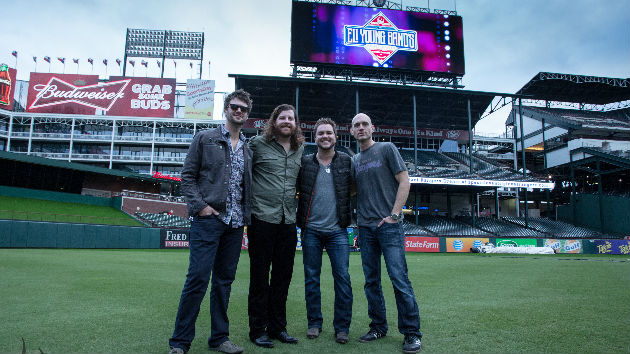 On Saturday night, the double platinum Republic Nashville act headlined the first ever Eli Young Band House Party at Texas Rangers Ballpark in Arlington.  With over 18,000 people in attendance with ticket prices ranging from $25-$60, the band’s first annual House Party was a smashing success!

EYB pulled out all of the stops inviting friends to join in on the fun. Reining ACM Vocal Duo of the Year Thompson Square and Easton Corbin who have each topped the Billboard Hot Country Singles chart twice opened the show.  Followed by Warner Brothers artist and Texas touring powerhouse Josh Abbott Band.  Each did a masterful job of getting the fans into the party spirit.

The crowd of eighteen thousand roared with delight chanting, ELI-YOUNG, ELI-YOUNG, as the band ran out onto the stage. The band performed 17 songs during an energetic 90 minute set including fan favorites “When It Rains,” “Highways and Broken Hearts” and “Guinevere.”

Fans screeched with delight when singer Mike Eli introduced friend and hometown hero Pat Green who joined the band in singing Green’s hit “Take Me Out To The Dancehall.”  They whipped into frenzy yet again when the band sang their current Top 10 hit “Drunk Last Night.”  Just when the fans thought the band had pulled out all of the stops, Lucy Hale of ABC hit show, Pretty Little Liars fame joined the band in singing their #1 hit “Even If It Breaks Your Heart.”  For the close of their high energy set the band invited Thompson Square, Josh Abbott and Pat Green back to the stage to join them for a rowdy and raucous performance of “Come Together” by The Beatles.

After a wild round of applause, hugs and high fives backstage with their family and team, EYB took the stage once more for an encore performance of their ACM award winning (double platinum) #1 hit “Crazy Girl.”  Mike Eli, lead singer of the band ended the night by thanking their fans for coming out and making their first House Party a wild and memorable night.  He also promised the band would be back next year.

“This was a big moment for us,” said Mike Eli. “We were humbled by how many people showed up.  We opened for Chesney in stadiums all summer.  Headlining a stadium ourselves was AMAZING!  It was also nice to have our long-time friend Pat and our new friend Lucy with us on stage for such a special moment.  Can’t wait for the sequel!”

To see if the Eli Young Band is coming to an area near you, visit their official website www.EliYoungBand.com.