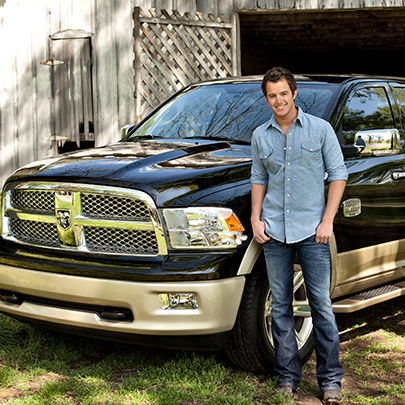 As part of its “Year of the Farmer” initiative, the Ram Truck brand has partnered with Mercury Records recording artist Easton Corbin on a multi-tiered program highlighting and underscoring the importance of farmers in America.

The program includes visits to and exclusive performances by Corbin, a former FFA member, at local FFA chapters across the country; a video web series (webisodes) documenting Corbin’s FFA tour; and a sweepstakes where fans can win special ACM Awards weekends in Las Vegas next spring.

“It’s clear that Easton, like the Ram Truck brand, cares passionately about ‘Year of the Farmer,’ the FFA organization and its mission, “ says Reid Bigland, President and CEO, Ram Truck Brand, Chrysler Group LLC. “Through his tour of local FFA chapters, he’s personally connecting with this special group of kids to help us further the notion that there’s a ‘farmer in all of us,’ while reminding everyone that we all have a role in reducing hunger in America.”

Elements of the Partnership Include:
Performances for Local FFA Chapters:  As a passionate former FFA member, Easton Corbin is dedicated to the FFA organization and to help continue to celebrate the spirit and hard work of the American farmer. Corbin has been meeting with FFA chapters in 12 markets as he tours the country, performing songs and answering questions from the audience. The visits began in August and will continue through February 2014.  Each event held so far has had 300-500 FFA members attending.

‘All Over the Road to the ACM Awards’ Sweepstakes: The sweepstakes launched October 21 and continues to February. The contest gives three fans a chance to win trips to a special Academy of Country Music Awards (ACM) weekend in Las Vegas April 4-7.  Each grand prize includes trips for two to Las Vegas, tickets to attend an invitation only Ram Country concert with Easton Corbin, tickets to the ACM Party for a Cause Festival and tickets to the ACM Fan Jam where Academy of Country Music artists perform live during the awards telecast. Winners will be selected randomly from entries received at ramtrucks.com/keepplowing, eastoncorbin.com or countryweekly.com. Visit the websites for contest rules, additional information and to enter the contest.

The Ram Truck brand’s partnership with Easton Corbin is part of the brand’s “Year of the Farmer” initiative dedicated to highlighting and underscoring the importance of farmers in America. Launched in February with the brand’s much talked about “Farmer” video airing during the Super Bowl television broadcast, the year-long initiative was designed to generate $1 million for the National FFA Organization (FFA) in collaboration with Case IH Agriculture, Farms.com and other partners.