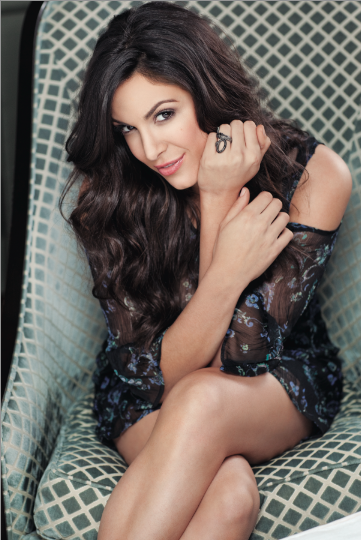 Not only is Rose celebrating the release of her new video, but she is also celebrating her recent nuptials to Rodney Atkins! CountryMusicRocks got the chance to catch up with Rose and talk about her wedding, new video, what’s ahead in 2014 and much more (including her favorite Rodney Atkin songs)!!!

CountryMusicRocks (CMR) – Do you have a specific moment from your wedding that really stands out to you?

Rose Falcon (RF) – Definitely!  First of all I was raised by my father so I really had no dreams of a big white wedding, or any wedding sort of speak, so I really wanted something simple.  I think it is usually a mother that sort of instills in you that want for a wedding and talks about it. So I didn’t really know how it was going to turn out. For us it was more about being married than actually getting married.

I had originally asked Elijah [Rodney’s song (12)] if he wanted to exchange vows with me because that is something that people do with step-parents sometimes. He kinda like rolled his eyes at me and was like, no way. That was months ago and then when we were doing the rehearsal he said, remember how you asked me if I wanted to say something? I said yeah and he said well I do. He’s pretty shy so I was shocked.  He said right before they pronounce you man and wife, I’d like to give a speech. I was like really, during the ceremony? I was so shocked and excited, but I didn’t want to show how excited I was because it might freak him out. He ended up during the wedding, he gave a speech right before we said I Do and there wasn’t a dry eye in the house.  It was one of those moments I never expected.  That’s pretty much this whole relationship.  It’s like you want to fall in love, and you look for love, and you ask God to bring that into your life.  But then he kind of gives you more than you could have asked for or even imagined, and that is a moment I couldn’t have planned.  As much as I planned the wedding and tried for everything to be perfect, I could have never come up with that.

CMR – Do you and Rodney have plans to write and/or record new music together?

RF – We Do!  We’ve been writing over the past two days. We write a lot, it is natural that we are going to write together because we are both songwriters. We’ve been working hard at it lately and putting our minds to it.  Also, we do sing a song together during the set.  We’ve been singing Rodney’s song “Cabin In The Woods.”  We’re looking for a duet right now, so we’ll see.

CMR – You recently released the video for your song “Love Like Crazy,” tell us a little about the song.

RF – It’s not about one specific instance in my life, it’s kind of just a dare to the person that you love to love you despite your flaws. The song is about saying, hey I’m not perfect. It’s alright with me, is it alright with you.

CMR – Can you give us a little background on the video and the idea behind it?

RF – It just started with me in the studio and we had a whole video of that and it was fairly boring.  It was pretty and cute, if I’m allowed to say that about myself (Rose laughs).  I thought the lighting was good and it was cool looking, but who wants to stare at me for three minutes straight.  I was desperate to come up with a moving concept and I got with Greg Travis at Travis TV and we spoke about it. I was praying and was like God, give me inspiration.  I wanted like divine inspiration, I wanted an idea and concept that would move people.  Melissa, a gal who works for Greg Travis, called me and said I found all these proposals and I keep watching them and I keep crying, I want you to see these.  Then I watched them and I cried.  I thought this is perfect, this is definitely the way to go.  We could have gone dark with it, I guess, but we went positive and so I think that is cool because it reflects the period I’m at in my life right now.

CMR – With 2014 quickly approaching, what do you have planned for the new year?

RF – I’m going to continue out this tour and we are working out some kind of other tour.  I really want to just keep traveling and playing.  I’m definitely due to record some new music, I have a bunch of great songs that I just haven’t gotten in the studio and recorded yet.  I need to find out exactly where I want to go with that production wise.   I have “Friday Night” out right now, which is a song I wrote with Eric Paslay and it is my first Top 20 single [as a songwriter]. We wrote it with our other buddy, Rob Crosby, so that is something that is really cool to get to share with your friends. I’m hoping in the new year that will keep climbing up the charts.

CMR – What is one of your favorite Rodney Atkins songs?

RF – There’s a song on the last record called “She’s A Girl.”  It’s so good.  I think any girl could relate. It is one of those songs where you feel like it was written for you, but you didn’t know the person when they wrote it.  Then I love “Cabin In The Woods.”  I’m kind of a sucker for ballads.  His new single “Doin’ It Right” is not just one of my favorite Rodney songs, it is one of my favorite songs pretty much ever.  As a songwriter, I’m just like “wow.”  The guy that wrote it [Jay Knowles], he wrote it by himself and this is something I aspire to do.

CMR – Music is consistently evolving, what do you think sets Country Music apart?

RF – I think definitely the fact that there is more truth to it. I guess I’m biased, but I definitely think that you find more true stories and more heart in country music.  That was what was appealing to me originally because I am a story teller.  It is just the truth and it is honest.