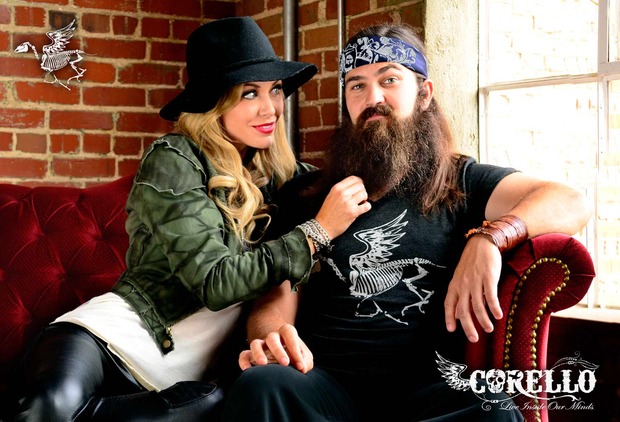 Corello, the highly-sought fashion line favored by celebrities, is ecstatic to partner with Jep and Jessica Robertson of A&E’s Duck Dynasty to raise funds for St. Jude Children’s Research Hospital © throughout the month of November.

“No Shave November” has become a popular fundraiser for celebrities and the public to raise awareness and funds for St. Jude. When it came to bearded celebs that could rock a fashion line this month, Corello knew there was no better fit than Jep Robertson alongside his wife, Jessica, to become the faces of the brand for the month.

“When we first started throwing around ideas for how we could give back this fall, the ‘No Shave November’ campaign seemed like a perfect fit because of its roots in the music community,” says Corello’s founder, Melissa Core. “Next, we had to find a bearded celeb that could not only rock our line but also shared our passion for the work that St. Jude does every day around the world.  Jep and Jessica are truly perfect matches to accomplish our goals for this campaign with his infamous beard and their enormous passion for giving back to those in need!”

Jep Robertson began working for his family’s business, Duck Commander, in 1998 and expanded their DVD series with his video editing expertise. With the launch of Duck Dynasty in 2012, he became one of America’s favorite Robertson brothers. Jep and Jessica met and married in 2001 and live in West Monroe, LA with their four children. Jessica’s love of fashion and history with St. Jude made the couple an ideal partner for this campaign.

“We are so proud to team up with Corello to raise money for St. Jude Children’s Research Hospital,” shares Jessica. “We have met so many children over the years that are currently or have been treated at St. Jude, and our family is so thankful for the work they do.  We all get so busy–working, being a mom or dad, a husband or wife, running kids to and from–and sometimes we need a reminder to slow down and think of those in need. The idea that no family ever receives a bill from St. Jude Children’s Research Hospital is amazing. That’s why it is so important to donate to St. Jude.”

Jep adds, “It’s easy to join us in this campaign to bring about awareness and give back. The Robertson men rock beards all year, so I want to petition to make it a year-round campaign for St. Jude,” he says with his signature good-humored grin.

“It’s cool to see that no matter what you do for a living, anyone can rock Corello’s threads,” says Corello designer Rick Caballo. “Jessica and Jep truly are rock stars with enormous hearts.”

To view the full line and shop for a cause this November, visit www.corellousa.com.

For information about how you or your company can be involved with No Shave November, visit www.stjude.org/noshavenovember.