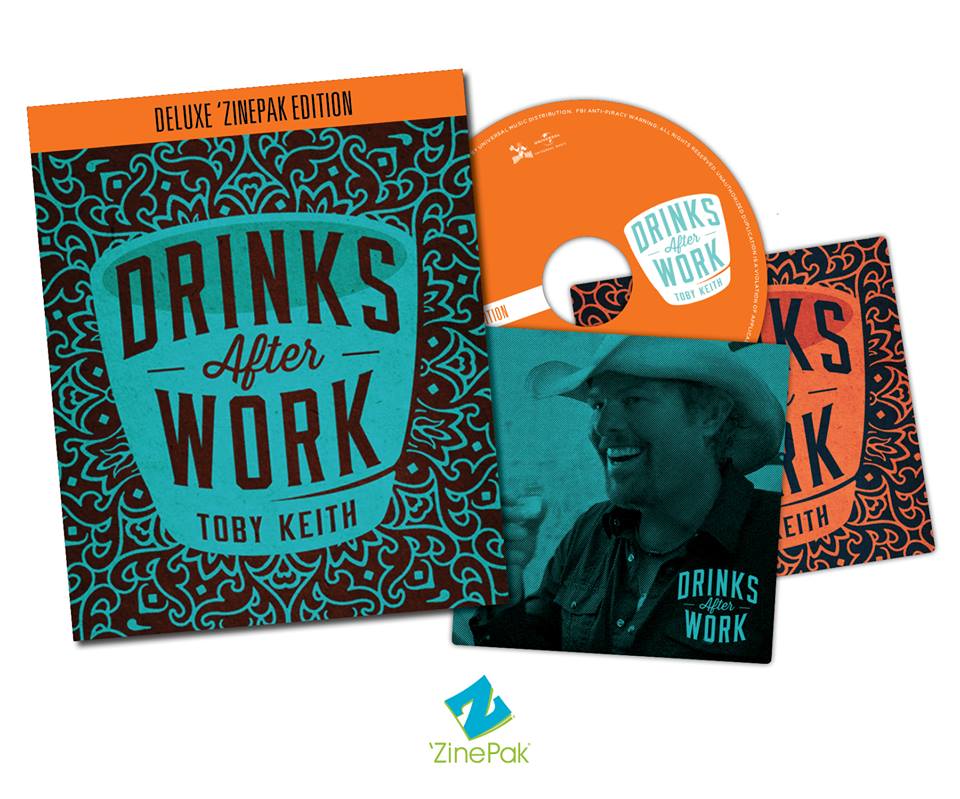 The most expansive album package of Toby Keith’s acclaimed career accompanies the Oct. 29 release of Drinks After Work. Available in 10-track standard and 13-track deluxe versions, the release also comes in an exclusive ‘ZinePak edition available only at Walmart. Click here to pre-order: http://smarturl.it/DAWzinepak

The ‘ZinePak takes the deluxe version to a new level with unprecedented content including a 64-page magazine built around exclusive interviews with the chart-topping Oklahoman. Topics include his benchmark-setting songwriting, stories behind the making of the album and more. Also included are two custom drink coasters where fans can rest their own drinks … after work or any other time.

The latter is a remembrance of Keith’s bandleader Chuck Goff, who died unexpectedly in March. Goff is also honored in the liner notes, with a note accompanying a full-page photo of the bass player: “This album is dedicated in memory of Chuck Goff, our longtime bandleader-bass player. He will live on forever in our thoughts and in our performances. We miss ya, Shmudlo.”

As usual, sole producer credit goes to Toby Keith, who has proven to be one of the most successful and acclaimed recording artists and touring draws in music history. Forbes recently ranked him as the top-earning country artist of 2012, and featured him in a cover story about his many successful endeavors including his I Love This Bar And Grill restaurants, Wild Shot Mezcal and Ford Trucks tour sponsorship. All of it, of course, is anchored by one of the most remarkable careers in the history of music.

Drinks After Work Track Listing:
1. Shut Up And Hold On
2. Drinks After Work
3. Before We Knew They Were Good
4. Little Miss Tear Stain
5. The Other Side Of Him
6. Last Living Cowboy
7. Show Me What You’re Workin’ With
8. Whole Lot More Than That
9. I’ll Probably Be Out Fishin’
10. Hard Way To Make An Easy Living
Bonus Tracks
11. Call A Marine
12. Chuckie’s Gone
13. Margaritaville (with Sammy Hagar)