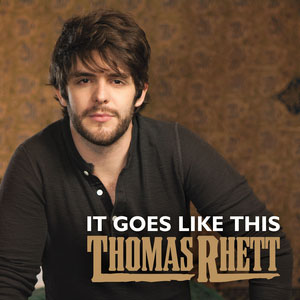 The Valory Music Co.’s Thomas Rhett scored his first-ever #1 single as an artist today with the GOLD-certified “It Goes Like This” topping the Billboard Country Chart. The track continues to be one of the top-selling songs on the iTunes Country Singles chart with nearly 1 million downloads to date and is the title track to his debut album, which is slated for release 10/29.

“I am so humbled and honored to have a #1 at country radio with this song. The response from fans and radio has been overwhelming,” said Thomas Rhett. “This is just one of those very special songs the moment I heard it I knew it would be a gamechanger.  It has been incredible to hear people singing the words back to me from the audience every night.”

The Georgia native previously celebrated topping the Country charts as a songwriter, penning Florida Georgia Line’s two-week #1 “Round Here.” The last month alone, he has also seen two of his cuts ascend into the Top 10.

The success comes as Thomas Rhett wraps a coveted opening slot on Jason Aldean’s NIGHT TRAIN TOUR and sets out on his first headlining dates – TASTE OF COUNTRY CHRISTMAS TOUR – on 11/7.