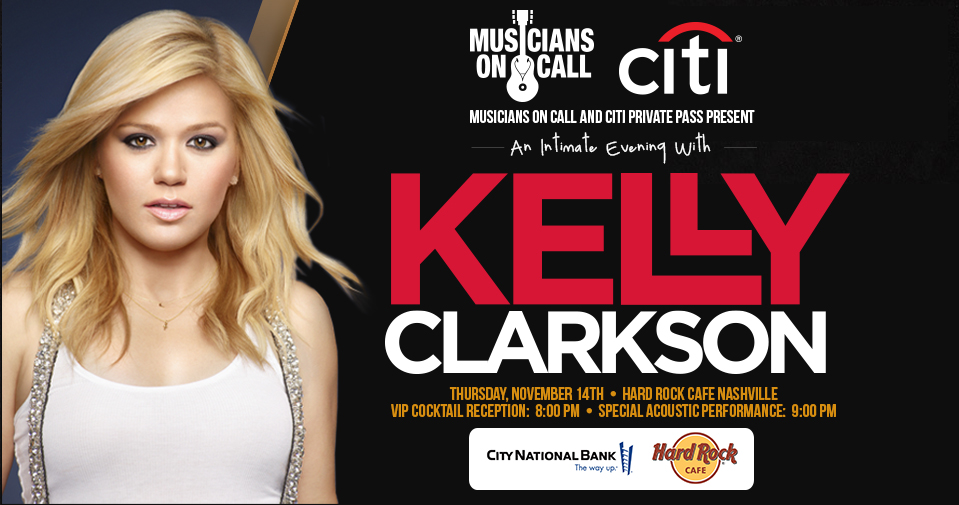 The Nov. 14 event presented by Citi Private Pass will showcase Clarkson in the intimate setting of downtown Nashville’s Hard Rock Cafe, located at 100 Broadway.  Tickets will be available for purchase exclusively by Citi Private Pass members for a limited time beginning at 10 a.m. CT Wednesday, Oct. 9 with general on sale opening at noon Friday, Oct. 11. Tickets start at $160 and include a VIP Cocktail Reception provided by Hard Rock Cafe and valet parking provided by Eagle Parking.

The night will also include a silent auction featuring items from local vendors and autographed memorabilia from today’s hottest stars.  All proceeds from the event will go directly to MOC Nashville and its efforts to bring live and recorded music to the bedsides of patients in healthcare facilities.  Since MOC’s expansion into Nashville in April 2007, it has brought the healing power of music to over 70,000 patients, families and staff in Middle Tennessee through 12 weekly programs in seven area healthcare facilities including the latest program, which recently launched at Alive Hospice. Through the generous support of artists like Clarkson, as well as sponsors Citi Private Pass, Hard Rock Cafe Nashville, and City National Bank, MOC Nashville will continue to thrive and grow.

Clarkson has long been a champion for MOC – last year surprising patients and lifting spirits at Monroe Carell Jr. Children’s Hospital at Vanderbilt with an impromptu performance for the holidays.  The vibrant singer is nominated for Female Vocalist of the Year at this year’s CMA Awards as well as nominated for Musical Event of the Year for her collaboration with Vince Gill on “Don’t Rush.”  Clarkson brings her soulful vocals to her latest Oct. 29 holiday release, Wrapped In Red.