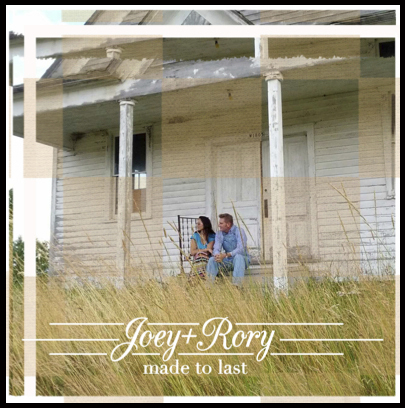 After 4 critically acclaimed studio albums and more than five years performing together as award-winning country music duo Joey+Rory, Rory Feek and Joey Martin are finally making music on their own terms.

Next Tuesday, October 8th, the husband-and-wife team will release their brand-new record, Made to Last, via their debut, self-run label, Farmhouse Recordings. Available on CD and Vinyl, the album features a dozen handpicked, homespun singles from the current season of their hit television program, The Joey+Rory Show.

“This album is the most personal project we’ve ever worked on,” explains Feek. “With this record, we had the freedom to record anything we wanted. We chose these songs solely because we loved them and wanted to sing them. I know the fans will be able to feel that intimacy when they listen to these tracks.”

Known for the straightforwardness and simplicity of their no-frills country, the pair sticks to what they know best with Made to Last: uncomplicated, heartfelt stories and fun-loving melodies, highlighting the duo’s down-home appeal that Country Weekly describes as an “effortless musical chemistry.”

A departure from the majority of their past albums, which feature wife Joey taking hold of the vocal reins, Made to Last sees both Feek and Martin sharing their time in the lead vocalist spotlight. Rory’s genuine, engaging voice and Joey’s warm, pure vocal stylings, heralded as “sparkling” by LA Times critic Randy Lewis, are highlighted throughout the album by a group of top-tier songwriters and musicians including master tunesmith Allen Shamblin (“I Can’t Make You Love Me”) and Neil Young/Mark Knopfler drum vet, Chad Cromwell.

Because of the intimate nature of the album, each song on Made to Last holds an individual significance for the duo. In fact, every track comes complete with its own personal backstory about why it was included on the record, providing listeners with a glimpse into the heart and soul of the tender duo. From paying homage to inspirations with cover tracks like Townes Van Zandt’s “If I Needed You” and Jamie O’Hara’s “50,000 Names,” to brand new cuts including the songwriter’s anthem “To Do What I Do” (written by Joey+Rory’s friend, Tim Johnson, who, sadly, lost his fight with cancer last October), the co-penned Zac Brown smash “Good Truck,” or the playful “I Love You Song” (Feek’s Valentine’s Day present to Martin), Made to Last is littered with personal touches and heart-felt sentiment that feels right at home, in any home.

Before joining forces with his wife in 2008, Rory Feek was already one of the most sought after songwriters on Music Row, penning multiple number one hits including Blake Shelton’s “Some Beach” and Easton Corbin’s “A Little More Country Than That.” Together as Joey+Rory, Feek and Martin rose to fame as finalists on the CMT talent competition Can You Duet in 2008. They have since garnered multiple chart topping singles and both CMA and ACM nods, including the Academy of Country Music’s Top New Vocal Duo of the Year award in 2010.

Currently, they can be seen every Friday night, all across the country, on The Joey+Rory Show, their critically acclaimed television series filmed live at the couple’s Pottsville, Tennessee farm and broadcast on rural America’s RFD-TV. They are also enjoying success with their weekly radio broadcast, The Joey+Rory Radio Show, played every Saturday night before the Grand Ole Opry on 650 AM WSM.

“I think it took us a while to really understand the importance of the music we were making,” Feek admits. “I believe the key to our success has been to not measure it by normal standards. If we’re being ourselves and being authentic with our music and our approach to making it… then that’s success for us.”

Joey+Rory are co-headlining an album release show tonight, October 2nd, at Nashville’s historic Belcourt Theatre along with their daughter, Heidi Feek, who is also releasing an album next week. In addition, the duo will be performing at the Schermerhorn Symphony Center in support of Don Williams on October 6th and 7th, right before Made to Last hits stores on October 8th.

Pre-Order Made To Last on Amazon by clicking HERE and for a physical copy click HERE.