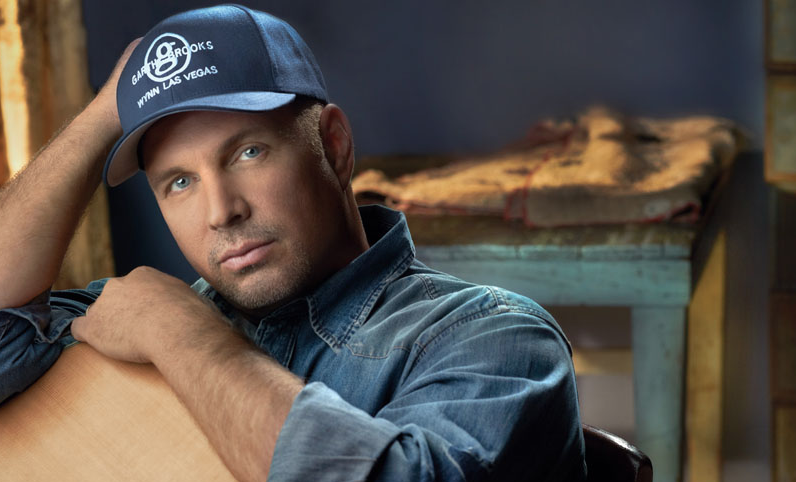 Country music superstar Garth Brooks will perform a rare live broadcast concert special, “GARTH BROOKS, LIVE FROM LAS VEGAS,” from the Encore Theater at the Wynn Las Vegas, Friday, November 29 (9:00 – 11:00 PM LIVE ET/ delayed PT) on the CBS Television Network.  This television concert event will feature Brooks’ final performance of his critically acclaimed, one man show at the Wynn Las Vegas, which has played to sold out audiences for the past three years.

“GARTH BROOKS, LIVE FROM LAS VEGAS” will feature Brooks in a very intimate setting, playing his guitar as he takes the audience through the musical journey that led him to become the number one selling solo artist in U.S. history. He will share his experiences listening to different musicians throughout his life, starting with the music of Merle Haggard and George Jones. Then, other musicians who influenced him like Simon & Garfunkel, James Taylor, Otis Redding, Bob Seger, George Strait and many, many, more. Throughout the show, Garth will perform some of their classic songs and show you how they influenced his greatest hits.

“Blame it all on my roots,” said Brooks, “This is the soundtrack of my life. Growing up the last of six kids, music was the life blood of our family and as you can imagine, mom, dad, and each kid had his or her own favorite stuff and it all funneled down to me.”

“We’re thrilled whenever we get the opportunity to create a television event with an amazing live performer, and there is no one better than Garth Brooks,” said Jack Sussman, Executive Vice President, Specials & Events. “Garth will give the audience a rare opportunity to not only hear his classic hits, but also the music that became the  soundtrack of his life and how those influences from the country, rock and pop worlds set him on the road to become the biggest selling solo artist in history.”

In 2009, Brooks announced that he was out of retirement and entered a multi-year “relationship” with Las Vegas resort developer Steve Wynn for performances at his Encore Theatre at the Wynn Las Vegas. The show has been hailed by the Los Angeles Times as “genius,” by EW.com as an “absolute revelation,” and Oprah Winfrey deemed it the “hottest ticket.”

Brooks’ illustrious career includes selling in excess of 128 million albums, being certified by the RIAA in 2001 as the #1-selling solo artist in U.S. history, being inducted into the Country Music Hall of Fame, The International Songwriters Hall of Fame and winning two Grammy Awards, 18 Academy of Country Music Awards, 10 People’s Choice Awards and 24 Billboard Music Awards, among many others.

Brooks retired from entertainment in 2001 to raise his children. In 2008, he was invited by President Obama to perform at his Inaugural Celebration at Lincoln Memorial. Later that year, the Governor of California invited Brooks to perform benefit concerts to help the State. Brooks performed five concerts in two days, one of which was televised for CBS, to raise donations to prevent fire catastrophes.

In December 2010, Garth finished an astonishing nine sold out concerts in six days to raise money for the flood relief efforts in Tennessee. ABC World News Tonight declared Brooks “The Person of the Week.” In January 2012, he was named the best-selling artist of the last two decades by Billboard, Nielson and Soundscan, with a whopping 68.5 million sales.