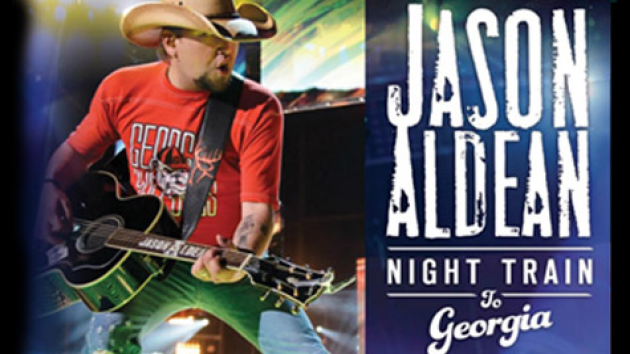 Starting today, fans can catch a concert clip of Aldean’s current No. 1 single, “Night Train,” on video on demand, or watch on CMT and CMT.com.  The special premiere will be promoted across all of CMT’s digital platforms, including CMT.com, CMT Pure, CMT Mobile, CMT Radio Networks and to the network’s more than 6 million social media fans.

CMT will give away five signed DVDs of NIGHT TRAIN TO GEORGIA, released October 15, to lucky fans on Twitter.  Once a day, from October 14-18, CMT will ask its followers, “What video of Jason’s did you see today in the 9 a.m. ET/PT hour?”   Five random winners will be chosen from those who responded correctly.  Fans must follow @CMT for their chance to win.

Filmed in April, NIGHT TRAIN TO GEORGIA features Aldean as he performs to a sold out crowd of more than 66,000 at the University of Georgia.  NIGHT TRAIN TO GEORGIA made history as it was the first concert to be held “between the hedges” of Sanford Stadium.  Palladia will also air the 30-minute special on Sunday, October 20 at 9 p.m. ET/PT.

JASON ALDEAN: NIGHT TRAIN TO GEORGIA will re-air on CMT at the following times:

Aldean, a current CMA “Entertainer of the Year” nominee, has sold more than 8.5 million records and notched 12 No. 1 singles.  His fifth album, “Night Train,” is certified platinum and includes singles “Take A Little Ride,” “The Only Way I Know,” “1994” and the title track.  Aldean has become one of the biggest live touring acts in the nation, known for his high-intensity, unbridled performances, shows that sell out in just minutes and for smashing dozens of all-time venue attendance records.   Aldean is currently on his 2013 Night Train Tour that has played to sold-out stadiums at Fenway Park, Wrigley Field and the University of Georgia’s Sanford Stadium.