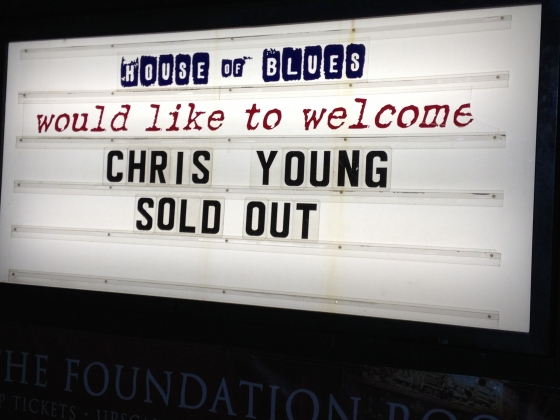 Chris Young took the music into the wee hours of the A.M. Monday night at his sold out show from the House of Blues in Los Angeles and topped the night with a donation of $25,000 from the show’s proceeds to two of his favorite charities.

“It was a fun night of music and being able to give money to the St. Jude Children’s Research Hospital and Stars for Stripes makes it all that much better,” said Chris.

Fans started lining up yesterday morning for the nearly two-hour show that featured six songs from Chris’ new album, A.M., including the title track and Top 10 single, “Aw Naw.” He performed all of his #1 singles including “Tomorrow,” “You,” “Gettin’ You Home,” “Voices” and “The Man I Want To Be” and also covered ZZ Top’s “Sharped Dressed Man” as part of his set.

While in Los Angeles, Chris will make his second appearance on The Ellen Degeneres Show on Wednesday, October 2 where he’ll perform his single “Aw Naw.” For airtimes, visit ellentv.com to check local listings.

Chris Young’s new album A.M. can be purchased wherever music is sold, including Amazon, iTunes and Walmart. For all the latest information on Chris Young, visit chrisyoungcountry.com and follow him on Twitter @ChrisYoungMusic.

One reply on “Chris Young Performs Sold Out Show In LA, Donates 25K To Charities”