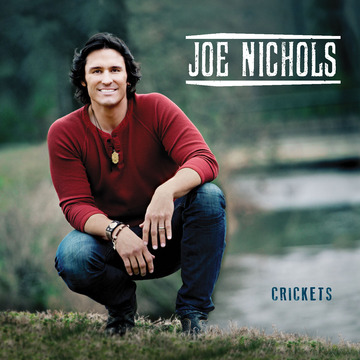 Music fans who are eager to hear Joe Nichols’ first new album in almost two years won’t have to wait until it hits shelves on Oct 8th. Spotify is offering fans the chance to hear CRICKETS before its release date, thanks to an exclusive album preview that launched today.

The 16-track CD includes Joe’s current Top 15 and climbing hit single, “Sunny and 75” and can be streamed now at: smarturl.it/PreviewCrickets.

Additionally, Spotify is offering fans the opportunity to chat live with Nichols through its Soundrop app (open.spotify.com/app/soundrop).  The live online chat will take place on Thursday, October 3 at 8 pm ET/ 7 pm CT.  Fans can join the chat at: open.soundrop.fm/s/joenichols.

Also, Nichols’ new album CRICKETS is available for pre-order now at a special, limited-time-only price of $7.99 at iTunes HERE.

Access to Nichols and his new music will continue through the week and into the weekend, leading up to the Oct 8th street date. CMT Hot 20 will profile the artist on October 5th, while Joe hosts a special segment of GAC Hits on October 8th. Headline Country got an interview with the artist, which airs on GAC Oct 10th.  Also, Nichol’s highly rated Backstory, which originally aired in 2012, will be airing again on GAC.  Catch the rebroadcast on Oct 7th, Nov 18th and Nov 23rd.

Nichols, who has been praised for his work by fellow artists and critics alike, is known for both his sentimental nature and fun loving attitude when it comes to music. The same artist who earned a huge hit with the heartfelt, traditional country ballad “The Impossible” also scored a number one with the contemporary and clever “Tequila Makes Her Clothes Fall Off.”  Nichols’ approach to song selection for CRICKETS follows the same diverse path.

“First and foremost, I wanted to make a good record that my fans will enjoy listening to over and over again.  I wanted songs that would feed both their soul, and their sense of fun,” Nichols has said of CRICKETS.

Nichols also explains the album title: “When listening back to all the tracks, we found one word that appeared in many of the songs—crickets.  It’s a very earthy little creature, and I think these songs are very earthy and organic, like this whole recording process was for me.  So when my label CEO Benny Brown suggested we title the album ‘Crickets,’ it made perfect sense.”