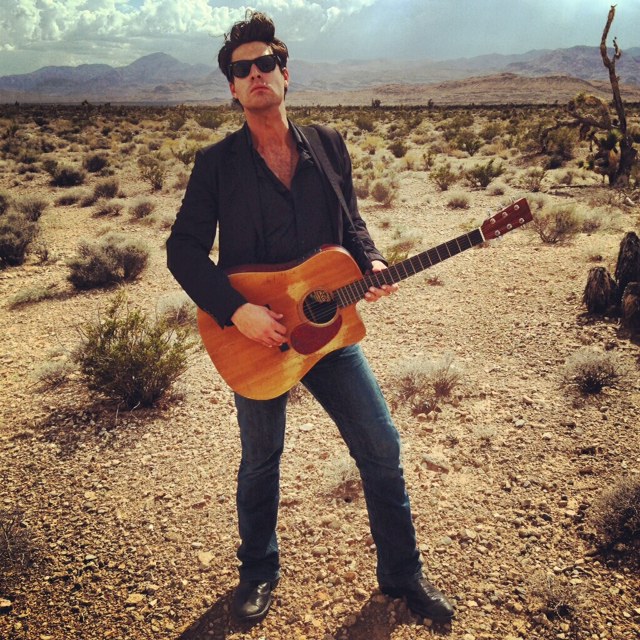 Country Music Newcomer Austin Webb recently released his sophomore single, “Slip On By,” to country radio.  Signed with Streamsound Records, Webb is currently working on his debut album while traveling across the U.S. promoting his new single.

CountryMusicRocks got the chance to catch up with Austin Webb on the phone while he was out in the desert of Vegas. We discussed his forthcoming debut album, as well as his new single & much more.  Webb gave us some insight to his new single and shared, “”Slip On By” is really a song that kind of came to me, I didn’t go out and find it and nobody pitched it to me.  I’ve written everything that I’ve ever recorded except for “Slip On By.” Providing further detail Austin revealed, “I was listening to Christian Radio about 3 months ago and I pulled over to the side of the road after I heard that song and cried my eyes out. I called Byron Gallimore my producer and told him I wanted to cut it. A month later somebody came up to him at his daughter’s softball game and pitched him the same song. He immediately called me and we went in & cut it the next day.”

The new single consists of not only a great song but also an important message. When asked what the song meant to him, Austin said “Time. Time is so important. We have so little amount of time in this world when you think about it. When I was younger I used to feel like I was invincible and I would never die. Now I feel so mortal.  At the age of 24 I feel extremely mortal now and realizing how important every day is. There is no need to do anything that you are going to regret. Each day is a gift.”

Webb goes on and says, “It’s about treating everyone equally, being there for your daughter, not wasting the time that you could’ve said ‘I love you’. It’s about not being scared, but about being fearless and hopeful. It’s totally about not letting anything mundane or trivial get in the way of being real with people.”

“Slip On By” serves as the second single from the country newcomer’s upcoming debut album.  Of the album, Austin reveals what fans can expect and says, “If anybody has been to my live shows, they know it is a lot of energy. I do a lot of uptempo stuff and just a couple of ballads. That is what the record is going to be like.”  Webb continues, “The album is like a quilt and each song is an individual patch. Together they form one unified piece of art, separately they stand alone. It’s just one really big quilt full of all different types of songs that go together.”  One thing for certain “It’s a country record, that’s for sure” says Webb.

It takes a lot of hard work and effort to get a career off the ground.  When asked who has had a significant influence on him and his career, Austin shares, “Charlie Louvin for one, he was kind of a big deal for me.”  Three years ago I drove out to Nashville in the middle of the night and went to Johnny Cash’s grave early in the morning when it was still dark, and I played my guitar for about an hour. That was my first time to Tennessee.”  Webb continues, “I stayed in Manchester, TN and I woke up in the morning and went to the Waffle House. Charlie Louvin was there, he’s a Country Music Hall of Famer and Grand Ole Opry member. We started talking and he said ‘your time is coming’ and I felt like he handed me some kind of metaphorical torch or something.  It was a strange day and then I opened for him that night. A year later I moved to town after I won a songwriting contest.”

If given the chance to write and record with anyone, Austin Webb tells us he would choose Kris Kristofferson. “I think he is, if not the greatest, one of the greatest American songwriters in the world. He’s been my biggest influence in my life. He’s the reason I started writing songs.”

Being a country newcomer, Austin is introducing himself and his music to fans.  When asked if there was one thing he would want to convey to fans about himself and his music he indicated, “Believe it or not. Take it as you want. It is who I am and I’m proud of it.”  Webb continues, “I’m very fortunate to be doing what I’m doing. I know tons of songwriters who are better at songwriting than I am, and I know tons of singers that are better singers. I’m very happy and fortunate that I can do this for a living and I just want people to know how grateful I am.”

Austin Webb is definitely one to keep your ears tuned in and eyes on.  Be sure to call in to your local country radio station and request his new single!  “Slip On By” is available on iTunes now by clicking HERE.  We loved this new song and think you will too, check out our review HERE.

One reply on “CountryMusicRocks Interview With Austin Webb”