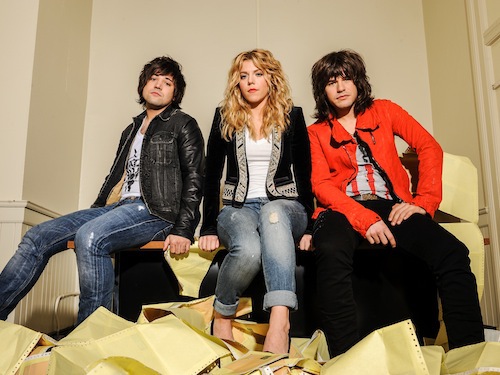 The WE ARE PIONEERS WORLD TOUR will kick off in Gothenburg, Sweden on November 8, 2013 at Tradgarn and crisscross Europe for five weeks before the band jumps back across the Atlantic blazing trails across North America. Click here for sneak preview!

“We live to play.   In our minds everything we do – writing, recording, interviews, appearances – is the means to the live end. To fully and totally understand our band, you have to see us live.  It’s the three of us in our element, our living room, our therapy session, our recess. We can’t wait to bring WE ARE PIONEERS to the world, “ says Kimberly Perry.

Throughout the WE ARE PIONEERS WORLD TOUR, The Band Perry will debut an entirely new show, including a new set, sound, lights and even a few new tricks.  On the run of European dates, various local acts will be in the support slot on the tour, and starting on January 9th Easton Corbin and Lindsay Ell will join The Band Perry on the North American dates for what is sure to be one of the most sought after tickets of the touring season. At the end of a Band Perry show, audiences walk out with smiles on their faces, knowing that the band left nothing to the imagination – the family trio pour every bit of themselves into their shows.   See a list of dates below, with more to be added in the coming weeks.

No strangers to life on the road, The Band Perry have been on tour approximately 850 of the last 915 days, captivating audiences not only in the United States, but also in Australia, Canada and Europe.  This summer alone, The Band Perry shattered attendance records at multiple arenas across North America and have played to over half a million people, no simple feat for a band on just its second album.

“Marching forward and making noise together. That’s what a Band Perry show is all about. There are these moments that we’ve built into the show when the three of us and our band are like an army or a marching band.  Us, our band, and the crowd – it’s like we’re a team, and we’re all in it together.  We are very fortunate that we get to walk on stage and do what we love to do – and it’s our fans that have given us that opportunity.  We sincerely appreciate each and every one of them, and we are looking forward to meeting new people across the world and making The Fans Perry a global community,” says Reid Perry.

“We believe pioneers are everywhere. Big and small, young and old, on North-American shores and abroad – we are coming to find you!” says Neil Perry.

G. Benji
I enjoy seeing @thebandperry perform, they always perform like it’s going to be their last [show].

Aaron Curley
So @thebandperry is definitely a force to be reckoned with.  They’ll be around for a long long time!!

Kelly Miller
Will definitely buy tickets to see you again! You put on a fabulous and energetic show and it’s worth every penny! You are definitely doing what you are meant to do!