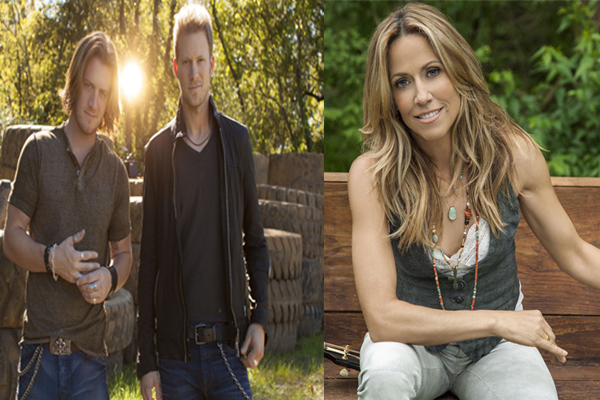 “I have been honored to have three CMA Award nominations in my career and I can tell you firsthand, the day the nominations come out is something every Country artist looks forward to,” said Crow. “I cannot wait to read the CMA Awards nominations on ‘Good Morning America’ on Sept. 10, the same day my very first Country record is released!”

“We are super excited and honored to announce the nominees for this year’s CMA Awards on ‘Good Morning America’,” said Brian Kelley of Florida Georgia Line. “Last year we attended the Awards for the first time and now to be able to make this announcement with Sheryl Crow is beyond anything we could have ever imagined!”

Crow and Florida Georgia Line will announce the final nominees in five CMA Awards categories live from the “Good Morning America” studios in the heart of Times Square on the ABC Television Network. The announcement will air in the 8:30 AM/ET half-hour segment of the morning news program.

Following the announcement, at 9:45 AM/ET, Crow and Florida Georgia Line will be at the Best Buy Theater in Times Square to announce the finalists in the remaining seven categories.

“We are pleased to have these dynamic artists bring these important and highly anticipated announcements to the media capital of the world, and still be able to share the excitement live with our constituents back in Nashville,” said CMA President of the Board of Directors Ed Hardy.

Four-time CMA Award winner Steve Wariner will be on hand in Nashville to announce the finalists for the 2013 CMA Broadcast Awards for Personality and Radio Station of the Year in four categories (small, medium, large, and major markets), as well as the finalists for the CMA National Broadcast Personality of the Year at 7:30 AM/CT. CMA’s radio partner, Premiere Networks, will make audio of the announcements available for Country Radio.

“I am excited to announce the final nominees for this year’s CMA Broadcast Awards,” said Wariner. “These are the men and women who are on the front lines presenting our music to the fans, and it’s very fitting that they be honored. As a CMA Award winner, I know how exciting it is to be nominated and I wish everyone good luck.”

CMA Awards nominees and winners are determined by more than 7,000 industry professional members of CMA, which was the first trade organization formed to promote an individual genre of music in 1958.

Ticket information for the CMA Awards will be announced Sept. 10 with information available at CMAawards.com. Or follow the conversation on Twitter at #CMAawards.