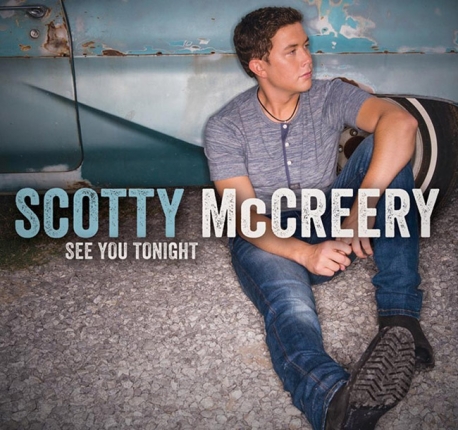 Scotty McCreery has announced the title of his highly anticipated sophomore album, See You Tonight, which will be in stores on October 15th.

McCreery gradually revealed the cover of the album on www.scottymccreery.com by challenging fans to uncover the image by sharing the page on Twitter and Facebook. Fans who participated in the challenge also have the opportunity to win a special flyaway package to an album launch event in New York.

See You Tonight is produced by Frank Rogers (Brad Paisley, Darius Rucker) and features several tracks co-written by McCreery, including the album’s title track, which is also his current single. This is the first album where McCreery had a hand in writing some of the songs.

“This album is a big step from where we were. I have been writing for a long time now, since I was a kid, but these are the first songs I’ve had a chance to record and release to the public and I’m excited,” says McCreery. “I was lucky to have my first single off the record be one that I co-wrote.  I am excited about letting folks hear it. We have been working on this for the better part of a year now, so it’s a long time coming.”

“I grew up loving old-school country, and you’ll hear those things come out on this record,” he continues. “You will hear the contemporary country, but you will always hear the steel guitar and fiddle and those little nuances that make the older country what it was. I definitely am trying to stay true to my tastes as an artist on this album.”

See You Tonight is the follow up to McCreery’s Platinum-selling album Clear As Day, which topped the Billboard Top 200 and Top Country charts, earning him a spot in the Guinness World Records Book for being the youngest male in history to score a #1 album on the all-genre chart with a debut release. Clear As Day also garnered the highest sales of any country solo album released that year, and held the # 1 spot on the Billboard Top Country Albums chart for six weeks. To date, McCreery has sold over 1.6 million albums in two years. The Garner, NC native has also earned both a Platinum and Gold album as well as two Gold Singles.

McCreery has been staying busy on the road with his first headline tour, The Weekend Roadtrip Tour 2013, which will continue to make stops around the country through the rest of the year.

For more information, be sure to visit www.scottymccreery.com.