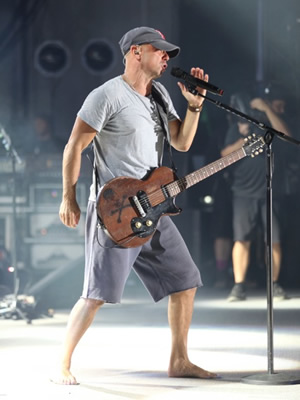 Spurred on by a group of particularly boisterous members of the No Shoes Nation, who kept telling the high impact songwriter he was overdressed, Chesney asked the sold out crowd if they all thought he was over-dressed. The screams suggested that his normal uniform of jeans, boots and t-shirt might be a bit much for the summer night; Chesney issued them a challenge.

“I said to them, ‘Will you give me three minutes then to get to the bus and change?’ And they cheered even louder,” recounted the singer after. “So the band vamped for a good three minutes on the intro to ‘Everybody Wants To Go To Heaven,’ and I ran… ran… to the bus, so I could get into the vibe of the crowd.”

Emerging in a pair of swim trunks, a t-shirt and a Boston Red Sox baseball cap, Chesney returned to the stage and played the rest of the show barefoot – taking the No Shoes Nation moniker literal. For the performer who packed’em in at Darling’s Waterfront Pavilion, the laidback look fit the night.

“I may be the only person in history to come back dressed down,” Chesney said with a laugh. “But that crowd was so alive and so ready to hang out. That was literally, that and Fort Lauderdale, the most freewheeling shows of the tour! If they didn’t have a curfew, we’d’ve probably start pounding covers and been up there ‘til 1 o’clock in the morning.”

Always one to strap on a guitar and play all night, there are few things Chesney enjoys as much as his pop-up Keg In The Closet shows. Having sold 49,302 tickets at Georgia Dome stadium Saturday night, Chesney is riding that energy straight into New Jersey’s Met Life Stadium as the No Shoes Nation 2013 tour heads into its final stretch.

With an early wake-up call Friday, for “Good Morning America”’s Summer Concert Series in Central Park, the Luttrell, Tennessean is packing in the memories to hold him over until he hits the road again in 2015. Called “The King of the Road” by The Wall Street Journal in a 2-page cover piece, the man who’s sold over a million tickets each of his past 10 tours, hit that mark in early June by virtue of playing 19 NFL stadiums across the nation this summer.

“When you have the kind of nights we’ve been having, you don’t want to see the summer end. The crowds the last few weeks have been incredible, and to look out in the crowd and realize these people have come out to party with us again this year, it just makes you want to work that much harder… I mean, how do you not give it up for a crowd shouting to take your shoes off?!”

“When I See This Bar,” the anthemic song Chesney wrote with Keith Gattis about celebrating the places and moments that mark us, is climbing the charts. The earthy, acoustic guitar-driven song is from Chesney’s seventh #1 Top 200 Albums debut Life On A Rock, Chesney will perform it on ABC this Friday, along with “Pirate Flag” and a couple classics.