Broadcast Music, Inc.®, (BMI®), a global leader in music rights management, along with Morris Artists Management and Sony Music Nashville played host to a Summer Block Party and its biggest No. 1 party ever featuring Jake Owen to commemorate his recent chart-topper “Anywhere With You” last night (8/19) in Nashville.

Celebrating his fourth consecutive No. 1 hit, Owen invited his fans via Twitter and Facebook to join in on the party complete with a free concert and No. 1 presentation. BMI’s Assistant Vice President of Writer/Publisher Relations Clay Bradley was on-hand to honor Owen, BMI songwriter Jimmy Yeary, and co-writers David Lee Murphy and Ben Hayslip for the summer smash.

Jake Owen said, “This was one of the most amazing nights of my life. Ten years ago I stood in a crowd watching Kenny Chesney play and thought to myself, ‘I can do this.’ To look out at this incredible crowd and share this #1 party with all of my fans is surreal.”

“BMI jumped at the chance to host Jake Owen’s Summer Block Party, honoring one of Country music’s hottest stars and the songwriters behind ‘Anywhere With You,’’’ said Bradley. “This event was the first of its kind for BMI and easily our biggest No. 1 party ever.” 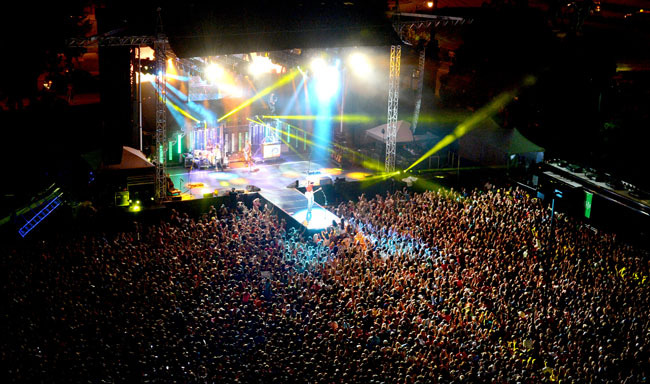 More than 20,000 fans gathered for the epic summer block party, which featured an exhilarating performance by Owen and quickly became a trending topic on Twitter. Playing to the packed crowd for over two hours, he was joined onstage by special guests Florida Georgia Line, Dierks Bentley, Thomas Rhett and DJ Silver who came out to support Owen for the celebration. The beer was flowing and many of Nashville’s popular food trucks lined up for the event. The evening festivities kicked off with a performance by new trio The Cadillac Three.

Since releasing his chart-topping album, Barefoot Blue Jean Night, Owen has emerged as one of country music’s leading vocalists. The RCA Nashville project delivered four consecutive No. 1 hit singles, including the multi-week chart-toppers; the double Platinum title track and Platinum “Alone with You,” and Gold-certified hits “The One That Got Away” and “Anywhere with You.” Poised to follow the success, Owen’s brand new single “Days of Gold” is now at Country radio nationwide and will be featured on his album of the same title to be released on 12/3.