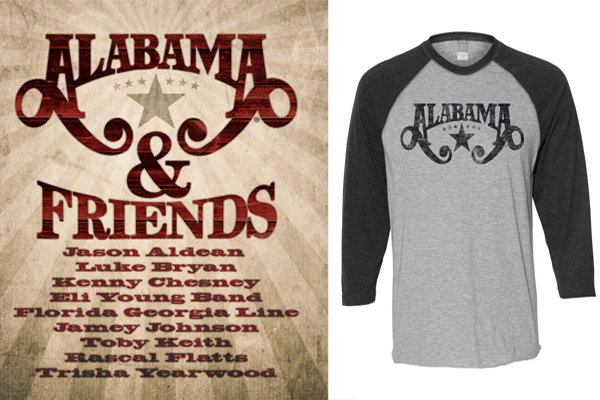 Congratulations Jennifer L.
One of country music’s most successful and influential groups of all time, ALABAMA, will release their highly anticipated new album, ALABAMA & Friends, on Tuesday, August 27 through Show Dog-Universal Music. The project is a tribute album, honoring the legendary group that helped change the face of country music.

To celebrate the release of ALABAMA & Friends, we have Two Prize Packs to giveaway!!! The Prize Pack includes an Alabama T-Shirt and an Alabama & Friends Poster. To enter to win, simply Like CountryMusicRocks and Alabama on Facebook .  Two winners will be randomly selected after contest closes on September 6.  One Entry Per Person.  Good Luck!

ALABAMA & Friends features some of country music’s hottest stars — all delivering their own unique versions of the multi-platinum-selling band’s biggest hits, including Jason Aldean (“Tennessee River”), Luke Bryan (“Love in the First Degree”), Kenny Chesney (“Lady Down on Love”), Eli Young Band (“The Closer You Get”), Florida Georgia Line (“I’m in a Hurry (And Don’t Know Why)”), Jamey Johnson (“My Home’s in Alabama”), Toby Keith (“She and I”), Rascal Flatts (“Old Flame”) and Trisha Yearwood (“Forever’s As Far As I’ll Go”).

The 11-song collection will also feature the band’s first new tracks in over 10 years – “All American” (written by Trey Bruce) and “That’s How I Was Raised” (written by Charley Stefl, Tony Ramey, Skip Sasser and Trent Tomlinson), which has the group teaming again with legendary producer Harold Shedd who worked closely with the group in their early years.

ALABAMA & Friends is available online and in stores on August 27.  Download your copy on iTunes by clicking HERE.

For more information on ALABAMA & Friends, as well as a complete listing of tour dates, visit thealabamaband.com.

One reply on “CONTEST: Enter To Win An Alabama & Friends Prize Pack”