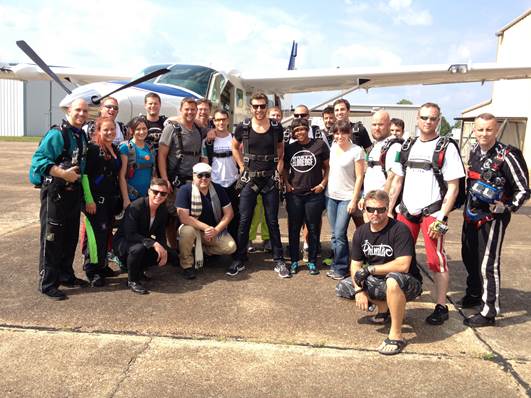 Powerhouse vocalist Brett Eldredge celebrated scoring his first No. 1 single, “Don’t Ya,” by jumping out of an airplane on Tuesday at Skydive Tullahoma in Tullahoma, TN. He was joined by family, management, WMN staff, TV and radio personality Storme Warren, USA Today’s Brian Mansfield, AXS Live’s Ashley Eicher and other lucky jumpers. “Don’t Ya” is off of Eldredge’s first studio album, Bring You Back, which was released August 6 on Atlantic Records.

The past few months have seen the “Don’t Ya” singer making his late night debut on “Late Night with Jimmy Fallon” and appearing on “Today” and “Live with Kelly & Michael.” Eldredge also opened 19 dates this spring for superstar Taylor Swift on “The RED Tour” and can currently be seen throughout the country at select tour dates with Dierks Bentley and Miranda Lambert.

For further information and a list of complete tour dates please visit:www.bretteldredge.com.