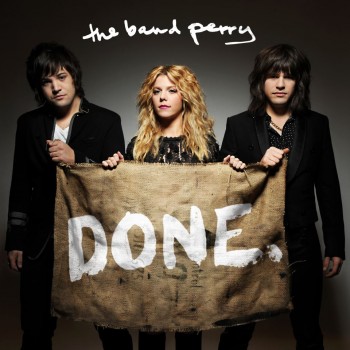 Superstar sibling trio The Band Perry tops the charts once again with their fourth #1 song “DONE.” With prominent beats, direct lyrics, unyielding vocals and a bold title, the Gold-certified smash dominates both the Billboard and Mediabase Country Charts this week. “DONE.” also establishes a special songwriting milestone for Reid and Neil Perry, who co-wrote the single with John Davidson and Jacob Bryant.

“Neil and I wrote ‘DONE.’ with the spirit of the underdog. We’ve worked a long time to get here. Celebrating 15 years since our first family band show – it’s accomplishments like this that make all the hard work count for something. We still have a long way to go, but for today we are relishing the moment,” acknowledges Reid Perry.

Neil Perry adds, “’DONE.’ is our show opener. It’s like song therapy for the fans and us. We all raise our fists in the air and shout a unified ‘Ugh!’ From there on out, the rest of the night is like recess. We are so thrilled about this #1.”

Earlier this month, “DONE.” also secured The Band Perry their second consecutive multi-week #1 single with a two-week run on both the BDS Canada Country Airplay and Mediabase Canada Country charts. The trio is also slated to perform on the Canadian Country Music Awards in Edmonton, Alberta, on September 8.

“We are proud of what ‘DONE.’ has accomplished for the three of us. Mostly though, we are proud of what it has meant to our fans. They’ve taken this lyric and made it the soundtrack of their breakups, their tough times, their struggles. We write for the people and we thank them for making this one #1,” says Kimberly Perry.

“DONE.” also marks the second consecutive hit from PIONEER, The Band Perry’s sophomore release on Republic Nashville. The Dann Huff produced project debuted at #1 on the Billboard Country Albums Chart and – in the US and Canada – has already produced the platinum, two-week #1 “Better Dig Two.”

The Band Perry is nominated for two Teen Choice Awards for Choice Break-up Song (“DONE.”) and Choice Country Group. Fans ages 13-19 have the chance to vote once a day via teenchoiceawards.com leading up to the August 11 telecast on FOX at 8P ET.

In addition to enjoying their own sold-out headlining dates and most recently breaking an attendance record with an audience of 21,000 in West Fargo, ND, The Band Perry is currently on the road with Rascal Flatts for the LIVE & LOUD TOUR.