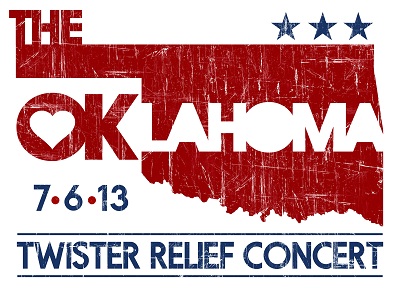 The capacity crowd will be entertained by Toby Keith, Garth Brooks, Trisha Yearwood, Willie Nelson, Sammy Hagar, Ronnie Dunn, Mel Tillis, and John Anderson as well as Carrie Underwood (via satellite from the Grand Ole Opry House in Nashville). Just added to the bill are Krystal Keith and Kellie Coffey. Garth Brooks will be going on stage at 4:00pm with Toby Keith scheduled in the closing time spot. The concert will end with a 10-minute fireworks display. Rumors are also abound of a grand finale performance.

Ford Trucks, Verizon Wireless, Academy of Country Music Lifting Lives, and Walmartare on board as sponsors. In addition to sponsoring the relief concert, Walmart and the Walmart Foundation have committed , $ 1 million to Oklahoma tornado relief. Sponsorship donations and underwriting of the concert, and donated services from suppliers and vendors from all over the country, will allow the net proceeds of tickets (after tax and credit card fees) to benefit the United Way of Central Oklahoma May Tornadoes Relief Fund to aid recovery efforts.

Verizon Wireless is offering a text-to-donate capability before, during and after the benefit concert. Currently, customers of any wireless carrier may donate by texting the keyword REBUILD to 52000, which will give an automatic $ 10 donation to the United Way of Central Oklahoma’s May Tornadoes Relief Fund. Verizon Wireless customers will be limited to five text donations.

“When Toby asked me to come on board, I immediately said ‘Yes,!'” said Sammy Hagar “He’s put together a hell of a concert lineup to help raise funds for the brave and resilient people of Oklahoma. My job is going to be to help them take their minds off their problems and have some much needed, good old-fashioned fun.”

For Keith, this event and the May storms that led to it are deeply personal. “I grew up in Moore, I live in Norman and I’ve got lots of family and friends who were directly affected. I know these folks and they’re resilient, but we’re going to keep helping them any way we can. I’m proud to get together with some others from around here who are just as committed as I am to supporting these communities.”

“Once we got the news that the tornado had hit Toby’s hometown, Miss Yearwood and I told Toby we were at his service for whatever he chose to do,” Brooks says. “I am amazed at the human spirit the tornado victims have shown. I am humbled by the giving of the volunteers. It is an honor to get to be a part of this healing process.”

Updates on the event and lineup will be posted at tobykeith.com.