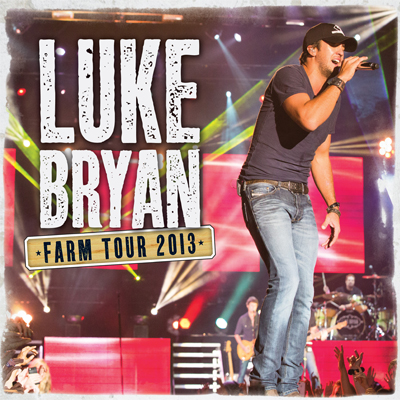 ACM Entertainer of the Year Luke Bryan has announced his fifth annual Farm Tour for October with eight southeast concerts set, including five in his home state of Georgia. The 2013 Farm Tour is scheduled to kick off on October 2nd in Statesboro, Georgia and will wrap on  October 12th in Valdosta, Georgia.

In 2012, the “Farm Tour” played for 100,000 fans, doubling the previous year’s attendance record. Eight scholarships were given to students from a farming family within the communities the tour played last year and the “Luke Bryan Farm Tour Scholarship” will continue in 2013.

The “Farm Tour” 2013 concerts will be held in the following cities with locations to be announced soon:

**See below
A ticket presale will begin for the Fan Club on Tuesday (July 23rd) at 10am ET and run through Thursday (July 25th) at 5pm ET. The public ticket on sale begins July 26th at 10am ET.

**The Athens and Tallahassee pre/sales and on/sales will be announced at a later time.

For additional “Farm Tour” 2013 information, including where to get tickets locally, stay tuned to lukebryan.com/farmtour .