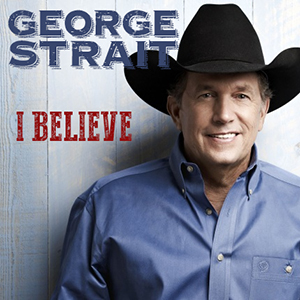 Country Music Hall of Fame member and MCA Nashville recording artist George Strait has released “I Believe” as the new single from his current album Love Is Everything and the follow-up to his 60th No. 1 “Give It All We Got Tonight” which named Strait the first musician in music history to achieve the milestone. The May 2013 release is his 40th studio album, produced by Strait and Tony Brown.

Strait co-wrote the new single with his son, Bubba Strait, and legendary songwriter Dean Dillon after watching the news coverage of the tragic school massacre in Newtown, Conn. last December.  Having lost his daughter at a young age, George felt as if it was a song he needed to write.  Yet, when he was working on the album, he didn’t initially record the song.  After listening to the playback of the album, Strait’s wife Norma insisted that he record the song so at the end of the session he asked the band to record one more.

“Like everybody, I was watching the coverage on TV,” said Strait in an interview that can be viewed HERE. “I know what these parents are going through. It’s the worst thing that can happen to you in your life. To lose a child….there’s nothing worse than that. So I started thinking about saying something about it.” He continues, “It’s a statement of faith, is really what it is. It turned out beautiful.”

Earlier this year Strait kicked off in high gear during the first leg of his The Cowboy Rides Away Tour. The tour earned Strait the title as the highest ranked country act on Pollstar’s 2013 Worldwide Tickets Chart, and he is expected to announce details and dates for the 2014 leg of his tour, kicking off early next year, later this fall.

For more information on Strait, Love Is Everything, The Cowboy Rides Away Tour and more, visit GeorgeStrait.com.

One reply on “George Strait Releases New Single “I Believe””