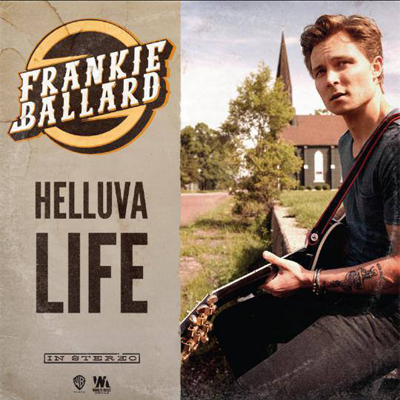 It’s a helluva week for Warner Bros. Records’ guitar slinger Frankie Ballard with the release of his brand new single “Helluva Life” to country radio. Impacting just in time for summer, the infectious song is the #1 most added at country radio nationwide with an impressive 57 first week stations already on board. “Helluva Life” is now available at iTunes HERE.

Co-written by Rodney Clawson, Josh Kear and Chris Tompkins, the song highlights the magic inherent in small moments that can bring joy and perspective to modern lives with more than their share of challenges and big questions – the perfect uplift.

“It’s a song that parallels my journey over the last 18 months,” says Frankie Ballard. “There is good stuff and bad stuff that happens to us. Nobody’s immune to that. We lean on each other in the good times and the bad times, and sometimes it’s hard to see where we’re going when we’re in the middle of it. I found myself feeling that big time.”

Media and fans alike are buzzing about the new song. Music Row Magazine awarded “Helluva Life” the Disc of the Day nod and writes, “completely enchanting. The ingredients are heavenly romance, a six-pack, a night sky, a tune on the radio and a swaying dance together. It is, indeed, a helluva life. A single to get lost in. This is THE song of the summer of 2013.”

With an ever-expanding fanbase, the single is poised to follow the success of Ballard’s self-titled debut album, which produced two Top 30 hits singles – “Tell Me You Get Lonely” and “A Buncha Girls.” Currently, the Battle Creek, Mich. native is in the studio with producer Marshall Altman (Marc Broussard) working on his sophomore album.