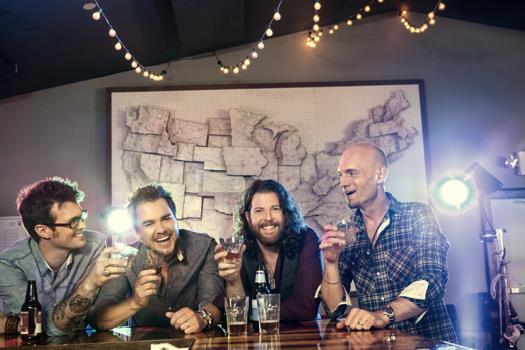 Eli Young Band recently released their brand new single, “Drunk Last Night,” to country radio. Fans have quickly embraced the new tune as it serves as the first release from their forthcoming album.  CountryMusicRocks caught up with band member James Young to talk about the new single, new album, and their experience so far on the No Shoes Nation Tour!

“It’s fun to have a new single out!” James tells CountryMusicRocks of the release of “Drunk Last Night.” Giving us some perspective of their new single Young shares, “A great song is a great song and we’ve come to acknowledge that over the years.”  It’s kind of like the song, “Crazy Girl.”  Our buddy Lee Brice had that song that came across us and we were like ‘holy cow we need to cut that.’ This was the same kind of song.”  Young continues, “Those are the kind of songs that  you know in your heart when you hear them it’s like jeepers you need put that on the record and run full throttle with it. “Drunk Last Night” was that song.

Eli Young Band first started introducing their new single on the No Shoes Nation Tour, when we asked James if they were nervous the first few times they played that song in front of tens of thousands of fans he told us, “Oh yeah, it’s crazy, especially doing a new song.”  Concert goers quickly embraced the new single, Young told us “That was thing about this song too, a lot of people started singing along right from the get go. We got that instant response which was awesome.”

Mike, James, Jon and Chris have been working on their new studio album and James said, “It’s been great.” Of the recording process so far James shared, “We started in January and we’re almost done with the new record, it’s amazing. We’ve always done things a little bit slower and made sure that we are going to put out the best record possible. We are so excited about getting the music out. Everything is turning out great.”

Eli Young Band has been spending their summer with Kenny Chesney on his No Shoes Nation Tour.  James tells us, “We’ve been on a lot of tours but this is like the top of the top. Kenny Chesney is probably one of the biggest tours you could ever do. I don’t know where we will go from here, but it’s been so amazing.”  The band has been learning a lot while out on the road with Chesney. “It’s been really educational, really fun and learning how to perform on this level is really amazing.”

It’s a special moment every night for the Eli Young Band as they take the stage on the No Shoes Nation Tour.  James shared, “I’ll tell you what, when you kind of take it in and sometimes take a step back and realize ‘holy cow we’re playing this stadium and we’re playing in front of this many people’ it’s amazing.”

“Drunk Last Night” is the lead single from the band’s forthcoming album and is available now HERE.