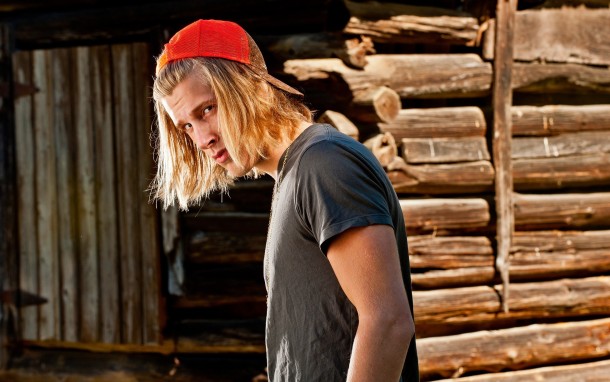 Country Newcomer JJ Lawhorn is gearing up to release his debut album, Original Good Ol’ Boy on July 16. The debut album is comprised of 13 tracks and features “Sittin’ On A Tailgate,” as well as his latest single “Stomping Grounds.”

CountryMusicRocks caught up with JJ Lawhorn to discuss his upcoming debut release.  JJ tells us, “It’s hard to explain or categorize this record, it’s the culmination of three and a half years of hard work. It’s really just the story of my life put into songs.  I tried to do just that, tell my story through my music. I feel like, as an artist, music is the best way to get to know us as individuals. I’m super excited that it is finally getting ready to be put out.”

Lawhorn wrote/co-wrote all 13 tracks on the album.  When it came down to the song selection process, he told us “It was very difficult.”  JJ continues, “I wrote the whole record and I came into my deal with two whole records worth of songs that I had already done. In six months I had banged out 20 songs that were great and capable of making the record. It was tough to knock 7 of them out to have 13 on the record. I feel like the songs that I picked, even though they are kind of dated & a little bit old, I feel like if there is a way that I would want to introduce people to me, that those are the songs that I would choose.”

All the songs on the album have a specific meaning to JJ, but he shared that he has a significant connection to “Good Ol’ Boys Like Us.”  Of this single, Lawhorn told us, “It’s a song that I wrote in about 15 minutes and it was right after a friend of mine passed away in a truck accident. He was in a truck with the two guys that are in my video “Sittin’ On A Tailgate”. JJ continues, “I felt like a lot of people in the community were destroyed about what had happened. I wrote the song, not necessarily trying to be a voice for these people or to comfort people, but I just wrote the song for me almost as kind of assurance, telling myself that God’s got a place in heaven for good ol boys like us. It turned into something way bigger than what I had originally intended the meaning of the song to be.”

In addition to the release of his debut album, Lawhorn is also gearing up to release new single “Stomping Grounds” to country radio.  “It’s a song about being proud of where I’m from and how my hometown helped play a part in who I am today” JJ tells us about his new single. “It’s cool that it is different. That is one of the things I just loved about the song. There are so many I’m proud of where I’m from songs, but it doesn’t matter if your from the middle of nowhere or your from Chicago.  You listen to this song and you understand it, you get it. Maybe you have a hometown sense of pride for the baseball team or the football team, whatever it is, regardless if your a redneck or not. Listen to the song, and go, you know what I’m proud of where I’m from.”

Music is consistently evolving and we asked JJ Lawhorn what he thinks sets country music apart. “I think what sets country music apart from other kinds of music is it’s just that average, every day, hardworking person’s music. People used to say to me, ‘country music is 6 strings and the truth.’  It doesn’t really matter where you are. A lot of people have to do the same things and have to deal with the working blues, or how their girl left them and they are heartbroken, or whatever the song is talking about. There is a country song for everything. It’s the average joe’s, every day person’s music.”

JJ Lawhorn’s debut album, Original Good Ol’ Boy, will be available on July 16.  Pre-order your copy of the album on iTunes now by clicking HERE.