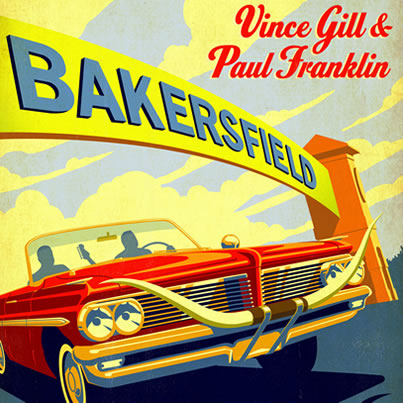 “This is just as much a guitar record for me as it is a singing record,” Gill says, “But it was fun for me to sing a whole record of the greatest songs ever. I guess what I’m real proud of is that when it’s one of Buck’s songs, I sing it very much in that vein. And the Haggard songs are very much in the vein he sang.  With Buck’s songs, you won’t find much vibrato in my vocals, and with Merle’s, it will come down to a low note and that quiver.”

“This may be Vince’s greatest project,” Franklin declares.  “What a showcase!  I’ve heard him sing for 30 years, but he sings licks on this record I never heard before.”

Thanks to our friends at MCA Nashville, we have your chance to WIN a copy of Bakersfield!!! Simply like CountryMusicRocks & Vince Gill on Facebook, .  THREE Winners will be randomly selected after contest closes August 9.  One Entry Per Person. Good Luck!

Get your copy of Bakersfield at a retail store near you or on iTunes by clicking HERE.