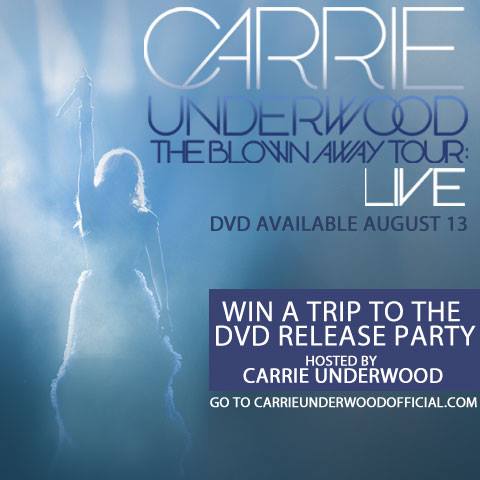 As part of the excitement leading up to the August 13 release of the DVD, fans can now take part in the exclusive The Blown Away Tour: LIVE DVD Release Party Fly-a-way Sweepstakes, where the grand prize winner will receive a trip for two to meet Carrie and attend a private DVD release party prior to the release date.

Also, for anyone who got to see Carrie in concert on her Blown Away Tour, 10 lucky winners who include the hashtag #BlownAwayLive in a tweet about their favorite memory from the tour will be selected in a random drawing from all eligible entries to win an autographed copy of The Blown Away Tour: LIVE DVD.

Fans can enter the Carrie Underwood The Blown Away Tour: LIVE DVD Twitter Sweepstakes between now and 11:59 PM CT on September 19, 2013.

Complete rules and details for the Fly-a-way Sweepstakes and the DVD giveaways can each be found on CarrieUnderwoodOfficial.com.

Filmed this past March, The Blown Away Tour: LIVE DVD features nearly 100 minutes of performance footage, including Carrie’s current smash single, “See You Again,” as well as many of her #1 hits, with such favorites as “Before He Cheats,” “Jesus, Take the Wheel,” and “Blown Away.” The live concert was directed by Christian Lamb and produced by Domenic Cotter.

Alongside the performance footage are exclusive bonus clips, produced and directed by Todd Cassetty, providing a behind-the-scenes look at the making of the tour, including interviews with Carrie and Raj Kapoor, tour director responsible for the large production and effects that defined the remarkable visual elements of “The Blown Away Tour.”

Additional content includes a photo gallery, as well as all four of the music videos from Carrie’s Platinum-certified Blown Away album: “Good Girl,” “Blown Away,” “Two Black Cadillacs,” and “See You Again.”

DVD audio for The Blown Away Tour: LIVE will be in Dolby® 5.1 and stereo.

The Blown Away Tour: LIVE is available for pre-order at SmartURL.it/BlownAwayLive.

Carrie’s remarkable “Blown Away Tour” launched in the spring of 2012 and continued through May 23, 2013, for a total of 112 dates in 110 cities, six countries, and three continents, playing for more than 1,000,000 fans and selling out every concert this year.