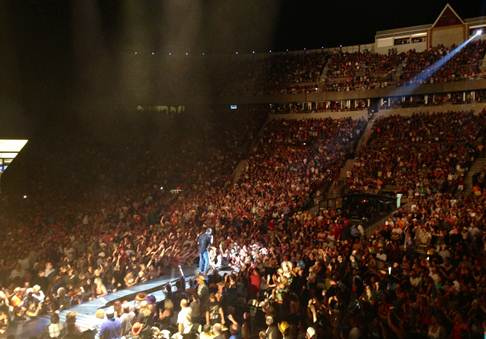 The “Ten Times Crazier” party started well before doors opened this weekend for Blake Shelton’s sold-out shows. Tailgaters arrived first thing in the morning; lining up to block real estate in the parking lot and set up camp for what became an ode to their favorite reigning CMA Entertainer of the Year, Blake Shelton.

Even Blake was blown away by the response of his fans saying, “I heard music playing and just figured it was beach goers but then I went outside and realized my fans had arrived earlier in the morning to tailgate. Here we are in New York and there are pickup trucks and cowboy hats filling out the parking lot at Jones Beach. That was beyond anything I had anticipated.”

The Ten Times Crazier tour is exactly that — it is crazier than anything you might expect. In addition to performing many of his No. 1 hit singles, Blake performs some older classics and keeps his fans guessing with a couple surprises throughout the show that you have to be there to see for yourself. All three dates this past weekend sold out with over 50,000 fans in attendance and tickets for this coming weekends dates have topped 60,000, selling out St. Louis, Indianapolis and Cincinnati.

The Ten Times Crazier tour features special guests Mercury Recording artist, Easton Corbin, and ACM New Female Vocalist of the Year, Jana Kramer and has dates running through the fall. For a list of dates and to buy tickets, please visit: www.BlakeShelton.com/shows.