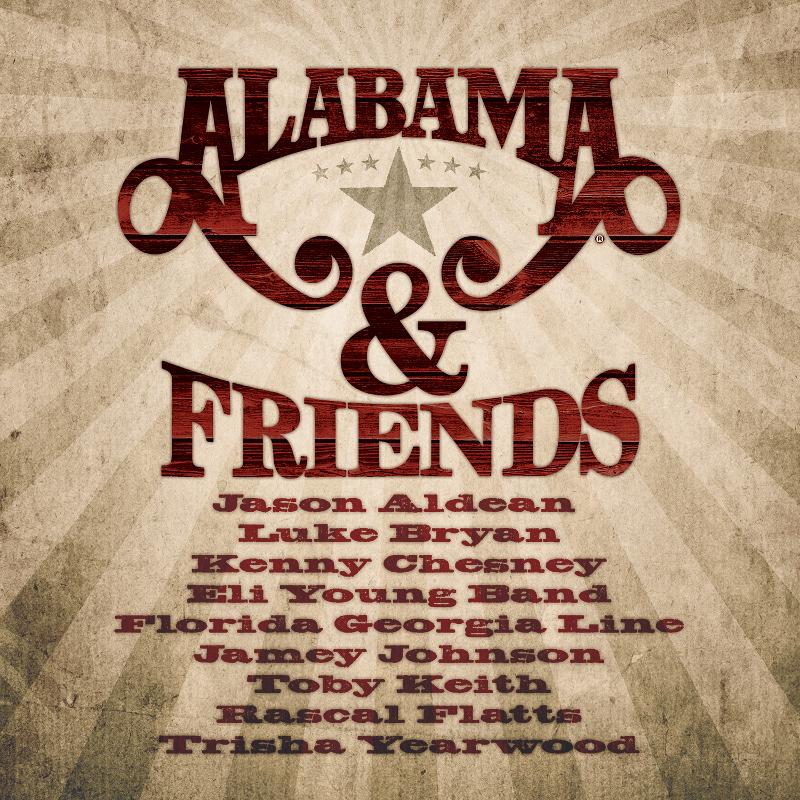 One of country music’s most successful and influential groups of all time, ALABAMA, will release their highly anticipated new album, ALABAMA & Friends, on Tuesday, August 27 through Show Dog-Universal Music. The project is a tribute album, honoring the legendary group that helped change the face of country music.

ALABAMA & Friends will feature some of country music’s hottest stars — all delivering their own unique versions of the multi-platinum-selling band’s biggest hits, including Jason Aldean (“Tennessee River”), Luke Bryan (“Love in the First Degree”), Kenny Chesney (“Lady Down on Love”), Eli Young Band (“The Closer You Get”), Florida Georgia Line (“I’m in a Hurry (And Don’t Know Why)”), Jamey Johnson (“My Home’s in Alabama”), Toby Keith (“She and I”), Rascal Flatts (“Old Flame”) and Trisha Yearwood (“Forever’s As Far As I’ll Go”).

The 11-song collection will also feature the band’s first new tracks in over 10 years – “All American” (written by Trey Bruce) and “That’s How I Was Raised” (written by Charley Stefl, Tony Ramey, Skip Sasser and Trent Tomlinson), which has the group teaming again with legendary producer Harold Shedd who worked closely with the group in their early years.

“It’s a storybook episode in my life and in the career of ALABAMA to have Harold on board and to see him as excited as we were after all these years,” says frontman Randy Owen.

The songs chosen for the project are among the most memorable in country music and will remind fans and the music industry alike why this Southern Rock/Country band broke so many sales records throughout their remarkable career. Their crossover appeal to country, rock and pop audiences and meteoric accomplishments set the bar high for those that have since followed.

“Our longevity is a tribute to the hard work we did in selecting songs, because it’s the songs that people remember,” says bassist Teddy Gentry.

“It’s very much an honor that they’d take part in an ALABAMA tribute,” guitarist Jeff Cook says of the acts included on the album. “We had a lot of fun working with them, and I think the finished product testifies to both the fun and the quality that went into it.”

After signing with RCA in 1980, ALABAMA soared to the top with 21 consecutive No. 1 hits, a feat that will most likely never be equaled in any genre. During their career, they have had more than 30 singles that have topped the country charts and have sold more than 73 million albums worldwide. They are one of the most celebrated groups, scoring more than 150 major industry nods, including two Grammys, the Minnie Pearl Humanitarian award, Entertainer of the Year awards three times from the CMA and five times from the ACM, as well as the ACM Artist of the Decade award. They have earned 21 Gold ®, Platinum ®, and Multi-Platinum ® albums and were named the RIAA’s Country Group of the Century.

Earlier this year, ALABAMA launched their Back to The Bowery Tour. The highly successful tour has consistently sold out many of its previously announced dates, resulting in the addition of several new shows along the way, including an upcoming performance on November 3 at Nashville’s historic Ryman Auditorium. The Ryman date marks the very first time ALABAMA has performed a concert at the most famous former home of the Grand Ole Opry. Tickets to the Ryman concert will go on sale Friday, July 26 and will be available for purchase at all Ticketmaster outlets, the Ryman Box Office, 800-745-3000 and www.ryman.com.

For more information on ALABAMA & Friends, as well as a complete listing of tour dates, visit thealabamaband.com.