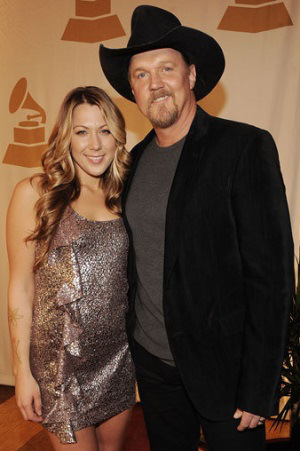 Veteran hit-maker Trace Adkins kicked summer off by winning All-Star Celebrity Apprentice, raising over $1.5 million for the American Red Cross and releasing Love Will… his 11th studio album (Show Dog-Universal). However, despite accolades and powerful performances, he has yet to share the stage with two-time Grammy winning singer/songwriter, Colbie Caillat who appears on the album’s poignant first single, “Watch The World End With You,” – until now.

On Wednesday, June 12, Adkins and Ms. Caillat will give their first televised performance together on NBC’s “The Tonight Show With Jay Leno.” Of the soul-searching single, USA TODAY wrote, “Not many guys could pull off a love song about the apocalypse, but danged if Adkins doesn’t make it sound romantic.”

Adkins, however, gives the credit to Colbie, “This song is about undying love and two people who feel exactly the same way about each other. It needed a voice that was feminine and strong. Colbie’s voice is pure, sultry and soulful all at the same time and I am honored that she could join me on this powerful song by Brett Edlredge.”

While at Leno, Trace will host a Facebook Q&A with fans at 3:00pm Eastern / 12:00pm Pacific on the official CMT Facebook page.  Using the new Facebook feature, Replies, the quality of the conversation will be more direct than ever, since users can reply directly to comments and start a conversation thread.  This new feature helps users manage multiple conversations on a post, and ensure that friends visiting the page always see the best conversations.