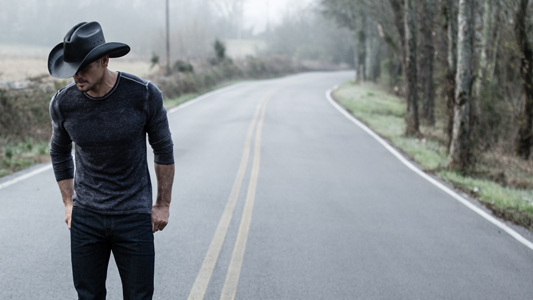 GRAMMY winning superstar Tim McGraw is at the top of the both the Billboard and Mediabase charts again this week for the smash hit, “Highway Don’t Care” with Taylor Swift, featuring Keith Urban on guitar.

In addition, the track has sold over one million downloads and set a record for single week audience impressions with 41.3 million during the May 27-June 2 Nielsen BDS tracking week, logging the biggest weekly audience sum since the Country Airplay chart switched to audience-based rankings in January 2005.  The three superstars joined together for this monumental musical event which marks McGraw’s 34th career No. one song and second consecutive No. one from his Big Machine Records debut TWO LANES OF FREEDOM.

“I thought this song had the potential to be really special the very first time I heard the demo,” said McGraw. “And then standing on the stage with Taylor and Keith performing it live for the first time on the ACMs, I knew that it was really the kind of magical collaboration that only comes along every few years.  The energy that night was undeniable…I know the three of us could feel it.  Radio continues to be supportive and excited about the music we’re giving them, and I’m so thankful for my friends there and for all the fans who have really taken this thing to the next level.  It just keeps getting bigger and bigger in our show every night.”

McGraw’s latest No. one achievement comes on the heels of another sold-out weekend of his TWO LANES OF FREEDOM 2013 Tour, powered by Pennzoil, with capacity shows in Indianapolis, IN; Cleveland, OH  and Washington, D.C.  Previous stops on the 30 city trek have critics chiming in to praise McGraw’s two hour action-packed set.

“The man sweats star power and has an effortless, sexy swagger that make it hard to believe he’s a mere mortal, yet he performs with humility, smiling at the response from the crowd as if he’s genuinely surprised they like him.” Tampa Tribune

One reply on “Tim McGraw’s “Highway Don’t Care” Reaches No.1 On The Charts”