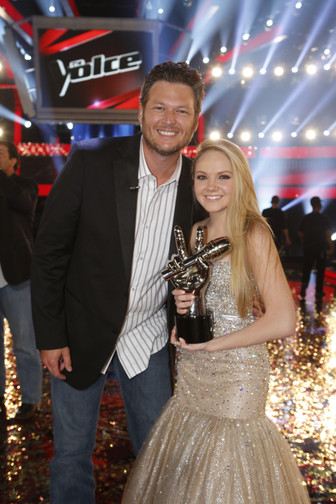 NBC’s “The Voice” crowned Danielle Bradbery as the winner in the season finale, earning her the grand prize of a recording contract with Universal Music Group. Bradbery, from Team Blake, beat out fellow finalists Michelle Chamuel and the Swon Brothers — all of whom performed on the telecast along with several other top musical acts.

Bradbery is a 16-year-old country artist from Texas who has never had a vocal lesson. With natural talent, her cousin encouraged her to start singing, and she soon had her first performance at a church festival. Bradbery cites Carrie Underwood, Miranda Lambert and Martina McBride as her musical influences. Follow her on Twitter: @dbradbery.

“The Voice” returns for its fifth cycle in the fall with the original four coaches – Blake Shelton, Adam Levine, Christina Aguilera and Cee Lo Green.