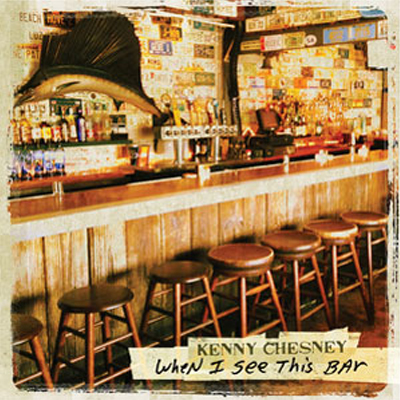 “When I See This Bar,” Kenny Chesney’s second single off the deeply personal Life On A Rock, may be about a very specific place and time in his life, but it turns out everybody has that place and those moments of becoming the people they grew into. With a chiming acoustic guitar and serious melodic build, the song – co-written with singer/songwriter Keith Gattis – has landed hard at country radio.

With 85 stations on at Country Aircheck’s reporters for the week’s #1 Most Added designation and Top 40 debut (#39) at Billboard, “When I See This Bar” resonates in very personal ways for just about anybody who ever grew up. That fact wasn’t lost on the man who’s played to over a million people on each of his past 10 tours.

“I think it’s happened to everybody,” Chesney says of the inspiration for the song. “You walk into a place where you really came of age, and you look around and realize that nobody there knows anything but all that happened there with you and your friends. But for you, it’s all still so real: right in that moment, right in that place. All the memories rush back – all the fun, all the crazy stuff you did, all the lessons and heartbreaks.

“Having played it for people since the record came out, I started to realize: what’s so incredibly personal for me… is just as personal to every one I’ve played it for. Only they all have a very specific bar where it happened to them! Hung out with friends, fell in love, fell apart – and that’s why I figured this did make sense as a single.”

With “Kenny Chesney Presents No Shoes Nation” premiering 9 pm June 19th on Great American Country (GAC), this year’s been revelatory for the high-energy performer with the highly introspective songwriting streak. Life On A Rock, his 7th Billboard all-genre Top 200 Albums #1 debut has been earning critical acclaim in publications ranging from USA Today to Entertainment Weekly, Chicago Tribune to Washington Post, as well as the current cover of PEOPLE Country and a Friday Arts cover in The Wall Street Journal.

In addition, Chesney has just shot a video for the song that captures the feel, the emotion and the moments that help give this song its resonance. Offstage, stolen moments, rehearsals, it’s the world of Kenny Chesney that most people never get to witness.

“I think you get to a place in your career where you want to invest yourself a little deeper, and maybe in a slightly more personal way,” Chesney says of the inspiration for Life On A Rock and his new single. “You don’t know how people are going to respond… especially when you’ve built your career out of being the place people go to escape all that stuff. But the response has been amazing… We’ve done the song onstage a few times, and the fans scream like it’s their favorite song from ten years ago.

“Now with radio embracing it like this, it makes me feel like this is a good thing. After all, ‘When I See This Bar’ is one of those places where we’ve all been. Heck, it makes us what and who we are.”

“When I See This Bar” is featured on Chesney’s latest album, Life On A Rock, available now HERE.