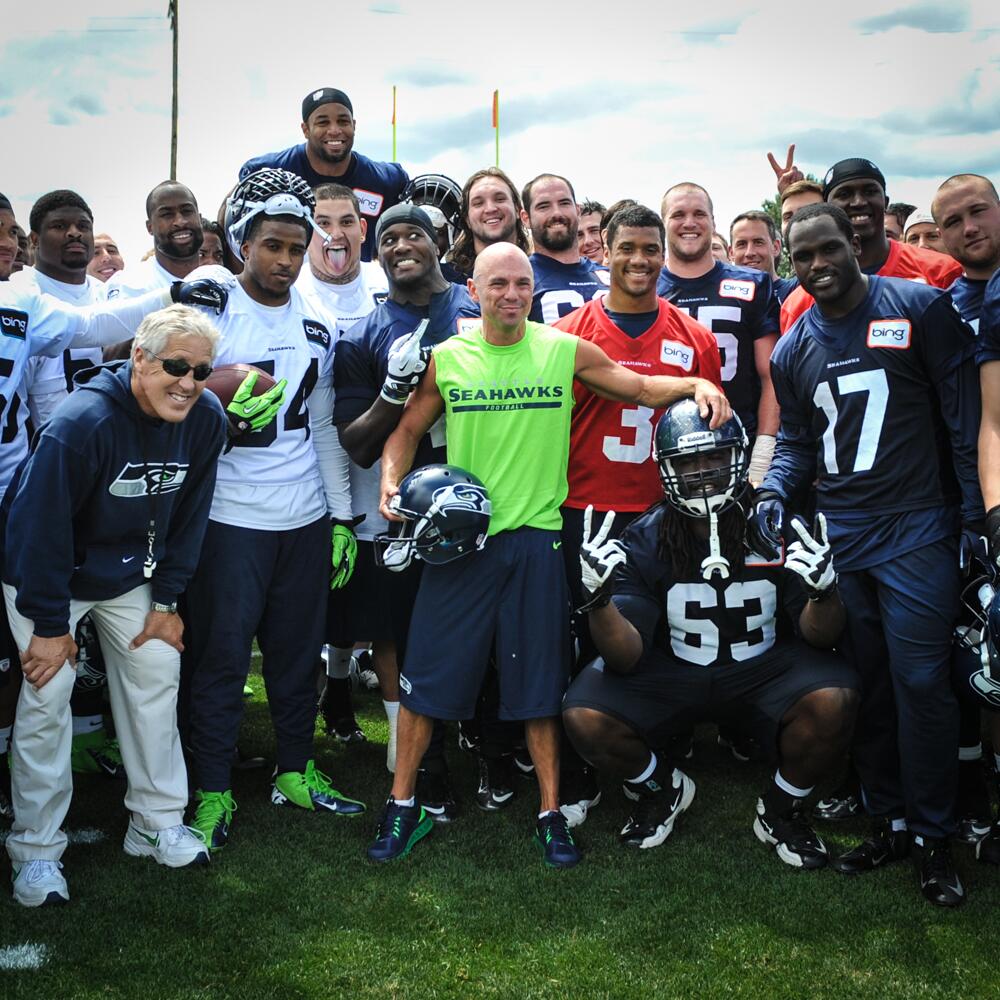 Kenny Chesney doesn’t just play NFL Stadiums, the man recently deemed “The King of the Road” by The Wall Street Journal is also known to play with the NFL teams as he makes his way across the nation. In preparation for his Saturday, June 1 show at the CenturyLink Field, Seahawks Coach Pete Carroll invited the 4-time Country Music Association and 4-consecutive Academy of Country Music Entertainer of the Year to join the team for their Friday practice.

“I met Pete a couple years ago at our show at the Tacomadome,” Chesney says of the invitation. “We kept in touch, and when we were coming he asked me if I’d like to work out with the team. I didn’t have to think about it… The answer was, ‘Yes!’”

So Chesney reported for afternoon practice at Virginia Mason Athletic Facility in nearby Renton, Washington for several hours of offensive drills. Beyond being the second largest NFL training facility, Chesney found himself in the heat of the pre-season preparation.

“To feel the intensity of an NFL training camp,” Chesney says of the workout, “and to be out there running those drills… You get a real sense of how much focus and heart goes into preparing to do what they’re going to do all season. Sports is such a big part of my life, it’s a huge rush to be out on the field with such world class athletes.”

Working with wide receivers Percy Harvin and Simeon Rice, Chesney was running drills and catching passes from last year’s NFL Pepsi Rookie of the Year Russell Wilson, who also was the Big Ten Quarterback of the Year in his final year of college play.

“You know when you’ve caught a pass from Russell Wilson,” Chesney says with a laugh. “It’s not like when we play football backstage… It’s pretty serious. And I caught a few of’em, too. So it was a really good day!”

Several of the players have expressed interest in seeing Chesney do what he does best at the place they play every week. No word as to whether they’re going to get up and sing, but they will absolutely be a part of the festivities as the No Shoes Nation Tour continues its trek across America, including 19 stadiums, plus amphitheatres and arenas.

Regardless of whether the players take the stage, they’ve already collaborated on a whole other kind of music video for “Living in Fast Forward,” which captures the practice highlights in all its glory. Click HERE to see it.

Meanwhile, Life On A Rock – Chesney’s 7th all-genre Top 200 Album debut — has been called “a bold move” by The Washington Post, “a quieter more contemplative meditation on sand sea” by The Chicago Tribune and the Associated Press offered, “The result is as appealing as it is surprising…”