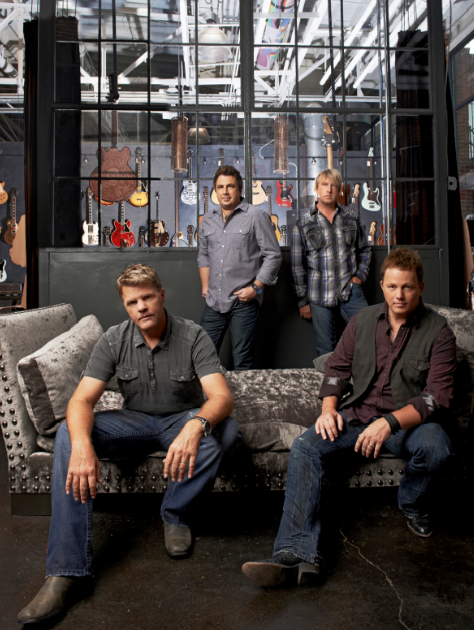 Country Music super group Lonestar just released their brand new album, Life As We Know It, on June 4.  The album serves as their first full-length album in over three years, as well as the first since the return of original vocalist Richie McDonald. Life As We Know It is comprised of 12 solid songs, including “The Countdown” and newly released single “Maybe Someday.”

While in Nashville, CountryMusicRocks caught up with Lonestar’s Richie McDonald, Dean Sams and Keech Rainwater prior to their annual fanclub party.  Of the new album, Dean shared with us, “Life As We Know It is our new record, and it’s has been a little over 5 years since we’ve done a record with Richie at the helm. It’s really, I think, the best record we’ve made.

Sams continues, “I know every artist always says that about their albums. Other artists have producers and all these hands in the pie, but this is 100% Lonestar. We wrote most of the songs, 9 out of 12 songs, we produced it ourselves, played everything and sang everything. I think it shows in the work. It’s something we are really proud of. We’ve been saying from the get-go whether we sold 5 records or 5 million records, we couldn’t be more proud of this album.”

With the band being so involved in the recording process, Richie shares with us one of their favorite moments.  “There were a lot of different moments and things that happened in the studio, but one that sticks out in my mind is when Michael Britt, our guitar player, was doing a guitar overdub. It was for “Party All Day,” and there is a guitar part on there that has a wah-wah peddle on it.  Michael is busy pickin’ the part and he couldn’t move his foot fast enough, his foot was cramping up.  Keech [Rainwater] gets down there and uses his hands and starts doing the wah-wah peddle with his hands.”

Keech speaks up and shares, “The wah peddle was in the rhthym of the song, the tempo of the song, and he had a hard time playing the thing and doing the peddles. I was actually packing up my drums at the time.  We were done recording and we was just doing the overdubs.  I kinda raised my hand and said ‘well how about if I do it and you just play the part?’  Michael kind of went, uhhh… Ok! Sure! So I did it and I think Richie got a kick out of it.”

In addition to Life As We Know It being a remarkable album, a portion of the proceeds will go to St. Jude Children’s Research Hospital when purchased on Pledge Campaign. Of their involvement Dean told with us, “We are part of the pledge campaign. 10% of all the proceeds go to the St. Jude Children’s Research Hospital which has been a charity that Lonestar has been involved with from the moment we had a record deal. It’s probably one of the greatest organizations going. The way they take care of the kids and their families, whether they have insurance or any money, they take care of them. It’s a really, really great organization and they are curing kids with cancer every day, and all the research they do. It’s is something we are really proud to continue to contribute to.”

“One of the biggest songs we ever had that Richie wrote is called “I’m Already There.” He wrote it about a personal experience, about us being gone on the road.  His son, Rhett, who was four at the time called and said daddy when are you coming home. There was a lot of longing for us to be home with our families.  Then 9/11 happened and we’re sending so many men & women overseas to fight for us.  That song was kind of adopted by the military as their anthem.  We’ve gone over to Iraq and have done some shows, and you’ll see some of the biggest, strongest, toughest guys out there in tears when we sing that song. Just to know a song like that, that we perform and that Richie wrote, can touch somebody like that – that is what country music is.”

Life As We Know It is available in stores as well as iTunes by clicking HERE.  Pick up a copy (various selections to choose from) on Pledge Campaign HERE and 10% of the proceeds will be contributed to St. Jude Children’s Research Hospital with your purchase.

To celebrate the release of Life As We Know It, we have FIVE Autographed official photos to give-away. Simply Like CountryMusicRocks and Lonestar on facebook .  We will randomly select five winners after contest closes on June 21.
***CONTEST CLOSED***
Congratulations John M., Amber S., Shawna O., KD C., and Andrew S.

One reply on “CountryMusicRocks Interview With Lonestar”